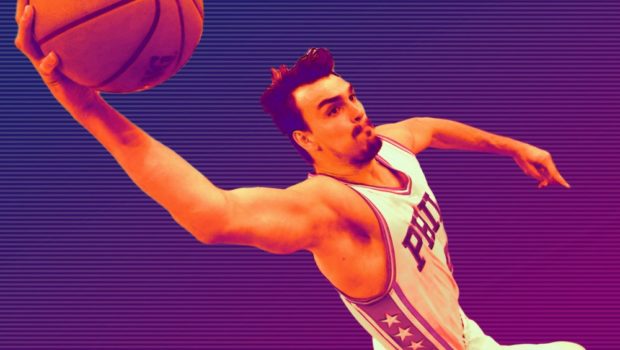 WHY THIS IS SIXERS SUPER DARIO SARIC’S BREAKOUT SEASON!

Says Kevin O’Connor of the Ringer.com:

There was an outside chance Saric would be the best player in the 2014 draft if Joel Embiid never stayed healthy, and I haven’t wavered from that feeling.

If you were to redraft the class of 2014 right now, who do you think would definitely be ahead of Saric in five years? Embiid if healthy, definitely. Jokic, yes. Other than that? Well, maybe Clint Capela, Aaron Gordon, and Gary Harris. Even then, it might be easy to argue Saric’s case.

After a slow start, Saric showed the league what he was capable of during his rookie season, averaging 17.9 points, 7.3 rebounds, and 3.2 assists over his final 30 games. He carried that into the 2017-18 season.

Once Saric settled into his tweaked role due to the presence of Ben Simmons, the Croatian forward flaunted his multidimensional game.

Saric is wise beyond his 24 years: He has a knack for getting timely rebounds, blocks, and buckets. There’s not a pass that he can’t make. And perhaps most importantly: While he’s not as integral to the Sixers as Embiid or Simmons, he accepts his role and excels no matter what he’s asked to do as a screener, cutter, or facilitator.

Saric might not receive enough opportunities to have a true breakout season; that may not come until he finds his way onto a team that can feature his true playmaking ability. But like he did from Year 1 to Year 2, Saric’s momentum from the postseason could carry over to this season. He was arguably the Sixers’ most reliable player in the playoffs: Saric attempted 14 shots per game and scored at least 20 points in five different games—including nights of 25 and 27 points in win-or-go-home games in the second round against the Celtics.

Markelle Fultz with a restored jumper could help make Simmons a more dynamic threat, since it could put Simmons in the role of a pick-and-roll screener. But I often wonder the same thing about Saric, who finished only 30 possessions as the pick-and-roll ball handler last season—six fewer than Fultz, who played in 14 games to Saric’s 78. It doesn’t look as smooth, but nothing Saric does is smooth. That’s part of the charm. He makes winning plays, and putting him in situations where he can attack off the dribble from the perimeter more like he did overseas could open up new dimensions of his game: