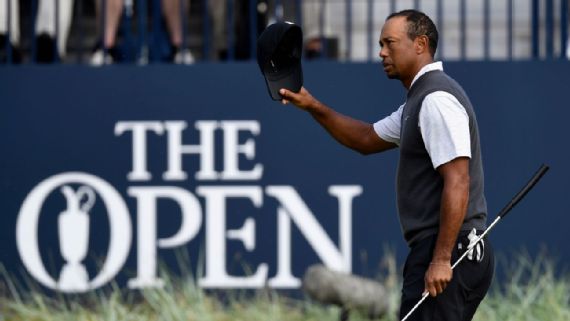 WHY THE WORLD IS ROOTING FOR TIGER WOODS TO WIN THE BRITISH!

Under the strict ordinances of sports journalism, you are not allowed to root for an athlete or a team. But you are allowed to root for a story, and Tiger Woods winning his 15th major championship more than a decade after he won his 14th is the best available story on The Open board.

So I silently rooted for Woods while he shot his 5-under 66 on Saturday, and will do so again Sunday without reservation or any concern for the professional principles violated when sportswriters root, root, root for the home team. Tiger Woods is not the home team. He is a 42-year-old golfer who was broken physically, mentally, even spiritually (by his own admission) between the time of his last major victory and now. A completed comeback with the Claret Jug back in his hands might represent the greatest golf story ever told.

What true sports fan would really root against that?

None at Carnoustie, that’s for sure. On an 18-hole walk with Woods and his starstruck playing partner, South African journeyman Shaun Norris, it was clear the Scottish fans were treating three-time Open champ as if he were a cross between Colin Montgomerie and William Wallace. Woods unleashed a barrage of birdies Saturday and reintroduced the Scots to the Tiger of old, not the old Tiger. They adored every sweet second of it before he landed at 5-under, four strokes behind defending champ Jordan Spieth, Kevin Kisner, and Xander Schauffele: