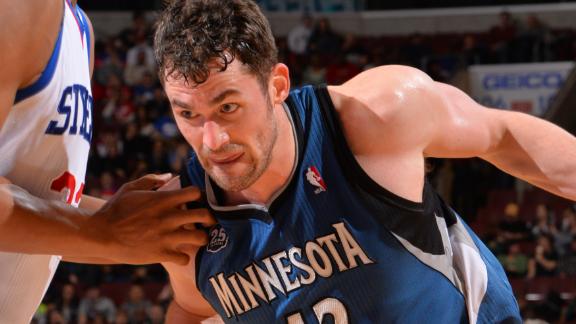 WHY THE SIXERS SHOULD GO AFTER KEVIN LOVE

They probably won’t get the Timberwolves’ coveted free-agent scorer and rebounder because they haven’t developed a winning tradition yet, but the move will please Philly fans who are dying for more good news to follow the draft and it will pay dividends for the future

“Expect the Sixers to make … a Love call, armed with two top-10 picks, potentially all their future first-rounders, and two interesting young guys in Michael Carter-Williams and Nerlens Noel. But they just don’t have the same stockpile [as other teams], especially since they view both MCW and Noel as cornerstones. Thaddeus Young is a good player, but he’s almost 26 and due nearly $20 million combined over the next two seasons. I’m not sure he really moves the needle for Minnesota.

But Sam Hinkie will call. “He will be very active,” said Scott O’Neil, the Sixers CEO. “He’s an unbelievable deal-maker.”

Philly took the slide back to no. 3 in stride. “I guess part of you wants the No. 1 pick, just to have the option,” O’Neil said. “But having two lottery picks, plus Nerlens coming back to join the Rookie of the Year — I’ll take that every day and twice on Sunday.”

And this from SI.com:

“One can only imagine the euphoria that would have ensued had the Sixers landed the No.1 pick just months after subjecting themselves and their fans to a brutal 26-game losing streak. Taking home the third pick isn’t ideal, but picking fourth or fifth in a class where there are three consensus possibilities for the top spot would have been far worse.

“Avoiding that worst-case backslide was big, but securing their second lottery pick was even bigger. Thanks to a 2013 trade involving Jrue Holiday, Philadelphia now holds New Orleans’ first-round pick, which came in at No. 10. It’s no great secret the Sixers needs players — and cause for hope — after gutting their roster last season, and now they hold two top-10 picks in a strong class. On top of that, 2013 lottery pick Nerlens Noel will debut next season, potentially putting Philadelphia in position to roll out a starting lineup composed of Thaddeus Young and four lottery picks from the 2013 and 2014 classes. Sounds a lot more fun than last season.”