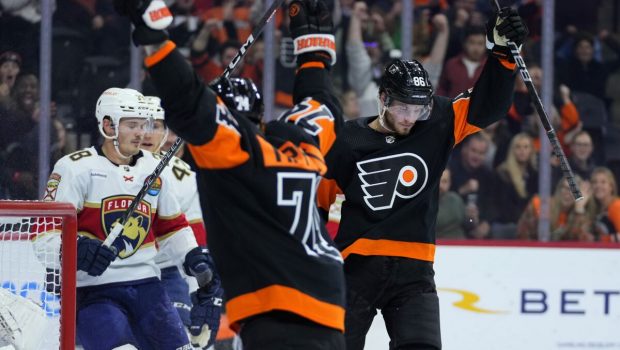 The NHL remains one of the top sports in the US, and the current season is certainly showing us why. Although the campaign may still be young¾after only starting up in early October 2022¾we have already seen some amazing games.

All keen sports fans in Philadelphia, of course, will be keeping an eye on how the Flyers are doing this year. In truth, it has been something of a mixed bag so far, with a generally positive start offset by periods when they have lost multiple games on the bounce. The visit of the Devils on 4th December 2022 is a chance for the Flyers to really get their season going, but what might happen?

Who do NHL Sportsbooks Think Could Win?

NHL betting is something that is now pretty big around North America, and this is very true in US states that have legalized the activity. When you think of the fun and excitement that betting on Flyers games delivers, for example, this is easy to understand.

Online sportsbooks are not just handy for betting on NHL matches, they can also give you a general idea of which side might have the best chance of winning a game. Although it might be a little early for the betting markets to have formed for this particular match, looking at the Stanley Cup betting is the next best option.

At present, the Devils are at +2200 and the Flyers are at +15000. This shows that the feeling around the NHL this season is that the Devils are the better team overall and stand more chance of making a Stanley Cup run. As a result, it follows that they will be the favorites for this game.

Can the Flyers Win?

If you like catching up on the latest Philadelphia Flyers news, then you also probably like finding out more about their opponents before watching or betting on games. But can Philadelphia emerge triumphant from this one?

The first positive you would look at here is the fact that the Flyers have beaten the Devils already this season at home. This was a 5-2 opening Week win and proves that Philadelphia has what it takes to gain victory over New Jersey.

In addition, the Flyers will be at home again for this match-up, and you have to feel that this gives them an extra edge in terms of being able to win. The Wells Fargo Center is never an easy place to visit, and the vocal home support should give the Flyers a real boost. Philadelphia have generally been in good form at home this campaign so far (as a 4-3 win against the Panthers earlier in the season showed) and this bodes well.

Which Philadelphia Players Could Prove Pivotal?

The Flyers have not always been at their best on offense this season and have sometimes struggled to make the right plays in games. It is therefore crucial that the top offensive players from Philadelphia step up to the plate in this match. This will enable them to really test the Devils’ defense and put pressure on their goaltender, Vitek Vanecek.

Unfortunately, the Flyers’ injury troubles could play a part in keeping the sides’ best offensive weapons off the ice. Top playmaker Travis Konecny picked up a hand injury in a recent Bruins game and may not be back for this match. This is on top of key offensive players like James van Riemsdyk and Sean Couturier being out at the moment, too.

If the Flyers can get at least a few of these guys back in for this game, their scoring and playmaking abilities will be valuable. If they are not fit though, the Flyers could be light in attack and rely on experienced center Kevin Hayes to rescue them.

Philadelphia’s defense could also be key in this game¾especially if their attack is not firing on all cylinders. Goaltender Carter Hart will need to be in fine form to keep the Devils’ forward players quiet and he could be the key to any win.

Since losing to the Flyers 5-2 in the opening Week, things have gone much better for New Jersey. This has seen them riding high in the Metropolitan Division and enjoying a much better season than many expected.

For this game, they will surely be keen to avenge their earlier loss to Philadelphia, and this could see them extra motivated to win. Previous results show that this is a team who cannot only score but who also has a great defense. This might prove tough for the Flyers to cope with and could give the Devils the edge.

In addition, New Jersey have been in good form on the road overall in 2022/23. A recent 5-1 win away at the Senators proves this, as does a recent 5-1 away win against the Canadiens. If they can find this type of form when they come to Philadelphia, then they have a good chance of coming out on top.

When it comes to the New Jersey Devils’ roster in 2022/23, their free-scoring offense really stands out¾with Jesper Bratt impressing in particular. He is the Devils’ leading player in terms of assists/goals, and this shows what an impact he could have. It is crucial that Philadelphia keep an eye on him and try to keep him quiet.

The 2022-23 Devils are a team with strength throughout the whole side. Even if the Flyers can keep Bratt quiet, people like Erik Haula and Tomas Tatar will be major threats. When you also think of what the tough defense players¾like Dougie Hamilton and John Marino¾bring to New Jersey, it is clear what a top team they are this year.

There is no doubt that this will be a top NHL match and one that will prove a stiff test for the Flyers. Although they won the previous game between these two teams earlier in the season, both outfits look to be in a different place now. This could see Philadelphia having to hope that their injury woes lighten and that their best players perform well on the night to gain a win.