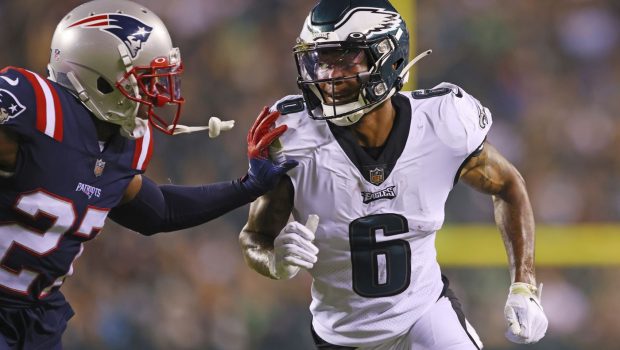 The Eagles wrap up their exo season Friday night at the Jets, and they open the regular season Sept. 12 at the Falcons.

So, where do they stand after a 4-11-1 2020, a housecleaning at quarterback and the entire coaching staff?

Carson Wentz is gone and this offense belongs to the Jalen Hurts, second-round 2020 pick.

The story is Hurts, and how new head coach Nick Sirianni, offensive coordinator Shane Steichen – who oversaw Justin Herbert’s exceptional rookie year in Los Angeles – and quarterbacks coach Brian Johnson can develop and nurture him in what is set to be his first full season as a starter.

He got a taste while starting the final four games of the 2020 season, a 51.88 percent completion percentage and 10 sacks evidence of a rocky situation. But within that came glimpses of the 1,000-yard rushing threat he showcased at college; for the purposes of helping him get comfortable, there’s no harm in letting him run riot.

For starters, they went for drafted Heisman Trophy-winning wide receiver DeVonta Smith, whose slick route-running and knack for hauling in everything thrown his way will soon end doubts over his size. Second-round center Landon Dickerson may be clouded by a rough injury history but he is a bully capable of entering the elite bracket in his position, and third-round defensive tackle Milton Williams lingers as a potential draft steal with measurements remarkably similar to Aaron Donald. The Eagles also signed veteran defensive end Ryan Kerrigan and former Minnesota Vikings safety Anthony Harris, before addressing a priority position by signing veteran cornerback Steven Nelson in July.

Last season the Eagles sank to 4-11-1, their worst record since 2012, and fourth place in the division.

An injury-stricken offensive line gave up a league-high 65 sacks (15 more than the next nearest team), wide receivers dropped like flies, first-round pass catcher Jalen Reagor endured a flat rookie year, the Wentz era came to an end and head coach Doug Pederson was fired after five seasons in charge.

With a first-time head coach and an unproven starter at quarterback, launching a postseason pursuit looks a mighty ask of the Eagles.

It feels every bit a transition season, but this is the NFC East, after all.

The departure of long-term left tackle Jason Peters has made for an intriguing battle between Andre Dillard and Jordan Mailata, the potential committee rushing threat of Hurts, Miles Sanders, Boston Scott, Jordan Howard and rookie Kenneth Gainwell is an exciting dimension.