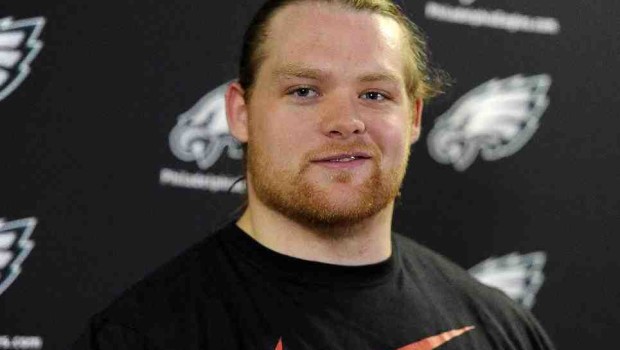 WHY THE EAGLES GO FOR THE GRADS

“When you look at people who are successful in any profession, it always goes back to college graduates,” said Eagles general manager Howie Roseman. “We found NFL players are no different.”

When Beau Allen, a 325-pound nose tackle from Wisconsin (photo above), toured the country before the draft to visit with teams, he got a question or two about academics. Most teams didn’t ask much more than just what kind of student he was. Then he sat down with Chip Kelly, the Eagles’ radical coach.

Kelly began peppering him with questions about why he chose his major (business), what his hardest class was and why (“I’m not much of an accounting guy,” he said. “I always struggle with it”) and how he learned in the classroom—that is, what professors needed to do to get through to him. Allen pegged himself as a visual learner, someone who likes to write everything down in a notebook to memorize it. A computer won’t do.

After the Eagles drafted him in the seventh round, Allen arrived in Philly to see that every player was given a tablet computer in which to see the playbook. Players were taking screenshots to better memorize plays. Allen was slightly panicked until he saw his stylus had a pen on the other end, and that the team gave him a notebook, too. Yes, Allen thought, the Eagles cared about how he learned.

Allen, who made the Big Ten Conference’s all-academic team while at Wisconsin, is one of six Eagle draftees to be on track to graduate out of the seven players they selected. In today’s game, that is unusual: This year, 98 college players went pro after their junior season, a record that marks a 34% increase from 2013 and an 85% increase from 2010. (That total doesn’t include players who had playing eligibility left but had already graduated.)

Philly’s philosophy of pursuing graduates was born when Roseman, the Eagles’ general manager since 2010, and Kelly, the team’s second-year coach, each discovered that teams with the most college graduates are overwhelmingly successful. Kelly learned this late in his coaching tenure at Oregon, when former Indianapolis Colts coach Tony Dungy, whose son played at Oregon, mentioned in a talk to Oregon players that in the 2000s, the two teams who happened to have loads of graduates were the Colts and New England Patriots. Those teams dominated the first decade of this century.

In a private conversation later, Dungy, now an analyst for NBC, told Kelly that his research showed players with degrees were more likely to earn a second NFL contract and make more money. He told Kelly “the guys with degrees have what you are looking for. They are driven. If it’s between two players, a degree might tip the scale. But at the time, I don’t think he was even thinking of the NFL.”

But before Kelly even arrived in Philly, Roseman was doing his own research. Each year, Roseman and his lieutenants take the last four teams left in the playoffs and do reports on them—studying their players’ height, weight, background and virtually everything else. Through those reports came evidence that the most successful teams had many college graduates on them. When Roseman and Kelly joined forces, the plan was clear.

The trends over the last five drafts are startling. Studies show that teams who select players who spent five years in college—and thus almost always have a degree—win big. Of the three teams with the most fifth-year seniors drafted, two of them met in February’s Super Bowl: the Seattle Seahawks and Denver Broncos. The Jacksonville Jaguars, who went 4-12, took the fewest.

The team that drafted the most players who stayed just three years on campus? The New York Giants, who have missed the playoffs the past two seasons. The Colts, Patriots and Washington Redskins, who have five total playoff appearances in the last two years, have taken the fewest three-year players, who rarely have college degrees.

Kelly said a degree is more than proof of intelligence. “It’s also, what is their commitment?” he said. “They set goals out for themselves and can they follow through for it? A lot of people can tell you they want to do this, this and this. But look at their accomplishments.”

The Eagles say they want players who are prepared, and a degree confirms that. Take wide receiver Jordan Matthews, a Vanderbilt economics major whose study habits translated perfectly to the NFL.

Before meeting with the Eagles ahead of the draft, Matthews slipped into Vanderbilt’s film room and watched a few Eagles games from last season—which he did with every team he met. Matthews was able to have an informed conversation with Kelly about the intricacies of his offense, something seldom done in the slog of pre-draft interviews, where some players meet with dozens of teams. The study habits paid off: The Eagles took Matthews in the second round.

Those close to Kelly say the degree is largely valued for one reason. “Coach Kelly is an offensive genius,” said former Oregon receiver Josh Huff, whom the Eagles took in the third round this month. “You have to be on the same level as him because you have to know why he’s doing what he’s doing.”

“In this offense you have to know absolutely everything,” Huff said. “If you have to think about it for a second, the ball will be snapped and you’re going to be looking dumb.”

No wonder the Eagles are going after the cap-and-gown crowd.