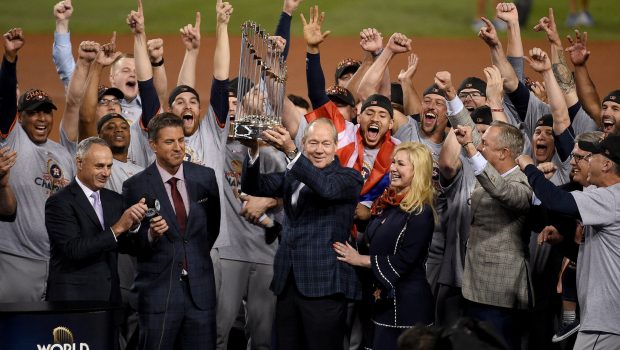 Just over a month after he announced the results of an investigation into the Astros’ brazen scheme, Major League Baseball commissioner Rob Manfred has become the focus of some of the harshest blowback, with players suddenly feeling emboldened to lash out at the commissioner on several issues, including his efforts in other areas unrelated to the scandal.

Justin Turner of the Los Angeles Dodgers said he was “out of touch” with the players. Trevor Bauer of the Cincinnati Reds called Manfred “a joke” over a proposed new playoff format. And Adam Ottavino, a pitcher for the Yankees, labeled him “anti-player.”

To many in the game, though, Manfred inflamed a difficult situation with clumsy attempts to defend his actions. The low point came last Sunday when, in an interview with ESPN, he denigrated the Commissioner’s Trophy, presented annually to the World Series champion, as a “piece of metal” in an attempt to explain his choices in the Houston case.

In doing so, Manfred — a Harvard-educated labor lawyer and a former baseball investigator trying to sort out truth amid the competing interests of teams, agents, players and their powerful union — had committed a cardinal baseball sin: He failed to show reverence for the game and its most precious symbols.

Mythology and romance have been hard to find in the wake of the Astros scandal.

On Jan. 13, Manfred announced that he had suspended Astros General Manager Jeff Luhnow and Manager A.J. Hinch for one season after determining that the Astros players had illicitly used technology to steal signs between opposing pitchers and catchers and relay information about incoming pitches to their teammates at the plate in 2017.

But perhaps the biggest point of contention was Manfred’s choice to grant immunity to all of the Astros players in exchange for their honest testimony.

Manfred last week again stood by that decision, which to those closest to him reflected the realpolitik sensibilities of a former investigator with experience in cases ranging from domestic violence to performance-enhancing drug use.

For a while, as the initial vitriol rained down on the Astros and their players, there was only sporadic criticism of Manfred.