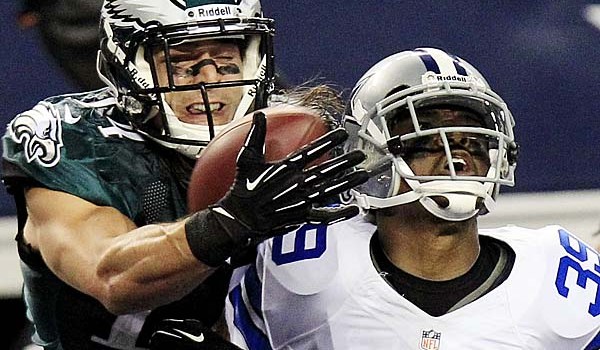 WHY RILEY COOPER IS THE EAGLES’ LAST WHITE MAN STANDING!

For those of you not paying attention, Eagles wide receiver Riley Cooper has been the focus of a lot of consternation this past offseason.

In reaction to the absurd allegations of Chip Kelly’s alleged racism leveled by soreheads Shady McCoy and Brandon Boykin, not to mention TV blowhard Stephen A. Smith, the last line always seems to be:

This wouldn’t be such a big issue if Kelly hadn’t decided to retain Cooper, who is white, while brooming McCoy, Jeremy Maclin and assistant coach intern Tra Thomas, all of whom are black.

This is because of Cooper’s drink-induced rant in 2013 in which he used the N-word, but was defended by African-American teammates Michael Vick and Jason Avant.

So what does Cooper have to say?

Listen to his comments, thanks to Reuben Frank of CSNPhilly.com:

“They’re always trying to bring someone in to try to take your job, and I know that, and I’m going to do everything I can for that not to happen,” he said.

“I’m not approaching the game any different than I ever have. I’m still going out there and busting my tail and doing what I do. I’m a high-effort guy, I’m a high-motor guy, and I do everything. I block, I catch, I run, and I’m going to try to continue to do it all.”

Kelly loves him, and despite the Eagles drafting three receivers in the first three rounds in a two-year span for the first time in franchise history, Cooper isn’t going anywhere.

Where you see a guy whose production dropped last year, they see a tough, smart, versatile receiver who creates big plays with his blocking.

Where you see a guy who’s only had nine games in five years with more than 61 yards, they see a former fifth-round pick who has more career receiving yards than 11 of the 18 wideouts taken ahead of him in 2010.

Where you see a guy who isn’t that fast, they see a guy with the same career yards-per-catch average as Dez Bryant.

Cooper has 148 catches for 2,091 yards in five years with the Eagles, and he’s one of only five players left from the 2010 team that lost to the Packers in the playoffs.

Say what you want. Try to come up with reasons to get rid of him.

“I’m still extremely hungry,” Cooper said. “I’m not complacent. I’m not content by any means. And I think that’s the way you have to approach the game every single year.”

Is he overpaid? Sure. Blame former GM Howie Roseman for that. Was Cooper supposed to turn down an overly generous contract offer? Would you?

Cooper will probably be the Eagles’ fourth wideout this year, and not many teams have a more talented fourth receiver than Cooper.

“Big-body guy, good hands, strong,” Mark Sanchez said. “Not only does he do well in blocking for the run game but provides a sure target whether it’s over the middle, some of those underneath balls or even going up and getting one in the end zone.

“And I think that’s where he really made his hay two seasons ago, right before I got here, and then last year he was going through some stuff I feel like, but he fought through it and played his butt off and made some big catches for us, and we expect similar good play out of him this year.”

Cooper indeed didn’t have the season last year that he had in 2013, when he had 47 for 835 with seven touchdowns and led the NFC with 17.8 yards per catch.

But his 55 catches a year ago were a career high and still second-most by any fifth-round receiver in the league.

“Look, two years ago he had a career year, so last year, people are like, ‘Oh, he didn’t do this, he didn’t do that,’ but he had more catches, it’s not like he just came out her and laid an egg,” Sanchez said.

“He played really, really well. He didn’t have as many of those spectacular top-10 highlight plays but that doesn’t happen every year. For anybody. That’s just the way things go. But I’m proud of how hard he’s worked.”

Now that the Eagles’ roster is stocked with fast, young receivers, Cooper’s role on offense will probably diminish.

But there’s always room on any roster for a smart, tough, physical backup who can play special teams, block willingly down the field and always play 16 games a year.

Cooper said even in Year 6, he’s focused on continuing to find ways to improve.

“You’re constantly learning and it’s helping your game,” he siad. “Even bringing Miles [Austin] in here, he’s going on 10 years, he’s teaching me a bunch of things. Bringing in those veteran guys helps out everybody. Pick his mind, what’s he thinking. Kind of see how he approaches this particular play, this particular route, this particular defense. All that stuff helps.”

One interesting thing about Cooper’s career is that he’s had a different quarterback just about every year.

He’s caught 152 passes in his career — 86 from Nick Foles, 24 from Sanchez, 20 from Michael Vick, 13 from Vince Young, five from Matt Barkley and four from Kevin Kolb. Add Sam Bradford to that list this year.

“Yeah, there’s been a lot of quarterbacks in and out of here,” he said. “I’ve played with a bunch of different guys.

Matthews and Huff are 23 and Agholor is 22, and they are the future of the wide receiver position here.

But Cooper is still a big part of what the Eagles want to do, and he said he enjoys having young potential studs like Matthews, Agholor and Huff around.

“I try to be there for them,” he said. “Coming in as a rookie, your head’s kind of in the clouds. Not just football but where to live, what to do, what’s going on, schedule, there’s so many things.

“I try to take them under my wing and just be like, ‘Hey, any questions, there’s no dumb questions, I’m here to help,’ and that’s just the approach I take and I think they kind of respect that and appreciate that.”