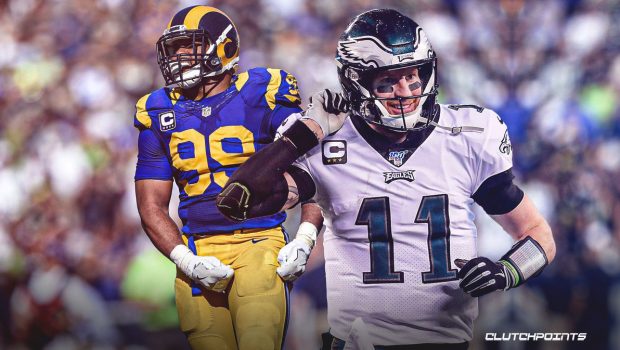 Eagles quarterback Carson Wentz has acknowledged that the Rams Aaron Donald is the kind of player capable of turning a game on its head, noting the Eagles will have to account for his whereabouts at all times:

“Everyone knows it. Everyone around the league knows the type of player he is and how he can really disrupt an offensive game plan. And so for us, we’re aware of that. Somebody we’ve got to always know where he is, but at the same time, we’ve got to execute, not play afraid, not play timid. . . . He is a game wrecker.”

Donald had a sack and four quarterback hits in L.A.’s Week 1 victory over the Dallas Cowboys, and he has another favorable matchup against the Eagles.

The Birds’ offensive line was totally overwhelmed against Washington for a whopping eight sacks for 62 yards. Wentz hardly had time to make his reads, resulting in a 24-for-42 passing day for 270 yards and a pair of scores, in addition to two interceptions.

Granted, the Eagles’ O-line should get a boost from the return of former All-Pro right tackle Lane Johnson, who missed the opener. Still, Philly will have its hands full with Donald and Michael Brockers on the interior.

Donald lines up at both tackle spots and sometimes in the nose position over the ball. His strength and athleticism are unparalleled at the tackle position, making him one of the most dominant defensive players in recent memory.

The Eagles will need to have sound protection as they hope to keep Donald in check bounce back with a win in Week 2. The Rams, meanwhile, will hope Donald can continue being a “game wrecker” as they hope to improve to 2-0 on the year.