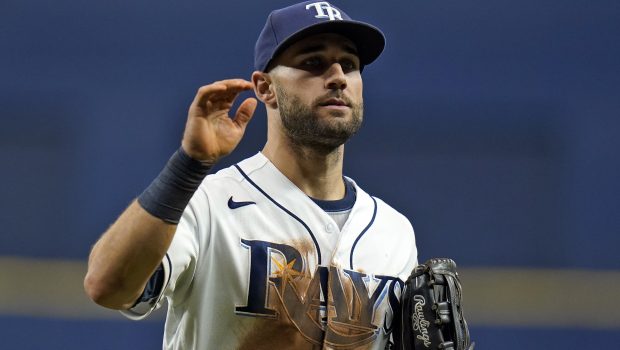 WHY PHILS SHOUD BE TEEING UP SCHWARBER, HAND, KIERMAIER!

The hot stove barely had a chance to preheat before the CBA negotiations broke down between the Players Association and Major League Baseball. The Phillies made one big move by locking up 30-year-old reliever Corey Knebel to a one-year deal. Knebel will slot into the bullpen and fill the void left by Hector Neris’ departure.

It was a smart buy-low move by Phillies President of Baseball Operations Dave Dombrowski, but the Phillies still need to get reigning NL MVP Bryce Harper more support. The Mets have made a ton of moves to improve for next season and the recently crowned World Series Champion Braves will no doubt be in the running for the NL East title.

It would be fair to say the Phillies are currently on the treadmill of mediocrity as Vegas bookmakers currently have them tied with Detroit for the league’s 15th best odds to win the World Series – perfectly average.

These moves would certainly improve their odds and make them a darkhorse contender for next season. If you do want to hop on a Phillie World Series future early, now might be a good time to take advantage of a sportsbook bonus and get on the Fightins before they have a chance to boost their odds.

After a down year in 2020, lefty slugger Kyle Schwarber had a major bounceback season in 2021. Part of what re-unlocked Schwarber’s potential was a move into the lead-off spot for the Nationals and the tutelage of Hitting Coach Kevin Long. Guess what team has a hole at the leadoff position and just hired Kevin Long.

The Phillies have reportedly had interest in adding Schwarber, whose asking price is rumored to be in the 3-year, $60 million range. This is a reasonable number for a hitter who boasted a .928 OPS with 32 home runs last season. Schwarber would be cheaper than other big-name free agent outfielder Nicholas Castellanos and would slot in at left field or as a designated hitter next season.

Trade for Kevin Kiermaier (above)

With the Rays in cost-cutting mode (again) a few of their key pieces have been made available. One player that should be of interest to Dombrowski is Kevin Kiermaier. The Phillies have had a gaping hole in Center Field for the past couple of years and Kiermaier could be a nice fill-in for a couple of years while the long-term option is still being figured out.

While he’s not the best hitter and injuries have hampered him in the past, Kiermaier has also been one of the best defensive outfielders in recent years, winning three gold gloves and a platinum glove. He only has one guaranteed year on his contract, so it would be easy to cut ties if things go south. Adding a defensive stalwart to the outfield would help out a team that was hurt by defensive errors all too often last season.

Brad Hand has to be one of the most interesting free agents available this offseason. A three-time All-Star with experience as a closer and situational reliever, Hand is coming off of one of the worst seasons of his career, where he posted a 3.90 ERA and 8 blown saves while bouncing around three teams (the Nats, Blue Jays, and Mets).

Like Knebel, Hand would be a great opportunity for Dombrowski to buy low on a proven reliever. This move would also provide another lefty option for Manager Joe Girardi, saving us all from the emotional roller coaster that can be Jose Alvarado.

One thought on “WHY PHILS SHOUD BE TEEING UP SCHWARBER, HAND, KIERMAIER!”