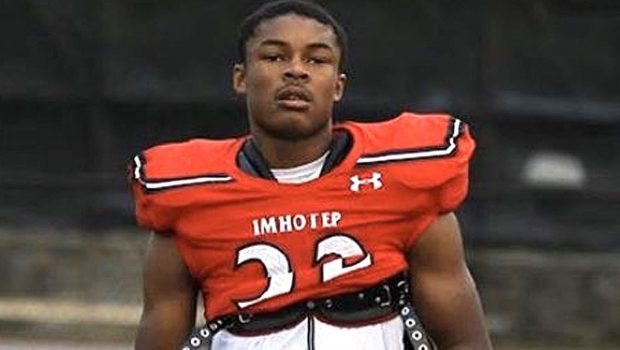 WHY PHILLY IMHOTEP’S KEON WYLIE IS GOING TO PENN STATE!

Wylie (6-2, 220 pounds) chose Penn State over Kentucky and Pitt, among other schools. He was impressive in Imhotep’s five-game spring season, making five sacks in one game against Northeast High. Wylie plays defensive end for Imhotep and projects as an end or outside linebacker in college.

During his interview with CBS Sports HQ, Wylie credited Penn State graduate assistant Deion Barnes for making the big push to recruit him. Wylie spoke with head coach James Franklin and fellow staff members but said that he “connected very well” with Barnes, who has made a significant impact on Penn State’s recruiting in Philly.

Wylie also noted that Penn State outlined a plan for him to play linebacker and that he was the only linebacker prospect on campus during his recent official visit.

“During the meeting, they told me exactly where they could see me playing and how they can help develop me and help get me to the NFL, where I can hopefully go,” Wylie said. “… That actually went into the decision I made. I didn’t want to go to a program that wasn’t developing people and taking them to the next level.”

Wylie is the 14th player to commit to Penn State’s 2022 recruiting class.