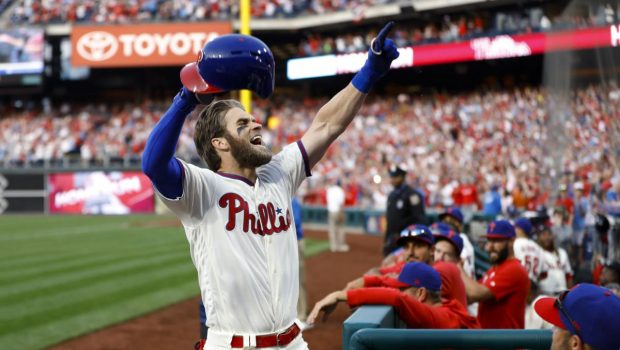 Bryce Harper has made many Nationals followers the emotional fans they claim not to be and emboldened Phillies supporters, who waved “We Got Him!” signs at that April 2 game and harked the revival of the Nationals’ ballpark as “Citizens Bank Park South.”

This year, though, Washington and Philadelphia could become meaningful on-field rivals for the first time.

The two clubs have experienced opposite fortunes over the Nationals’ entire 15-season existence, only twice finishing closer than 13 games apart in the National League East and never playing a September series with significant stakes for both sides. But after just five games against one another this season — in which the Nationals are 3-2 after administering a 15-1 shellacking at Citizens Bank Park on Wednesday — that seems destined to change.

The Nationals have demurred when asked about a rivalry — “I don’t worry about the Phillies … I worry about those guys right there in our clubhouse,” Manager Dave Martinez said — but they have played the most dramatic April baseball some Nationals players and Martinez could remember. Closer Sean Doolittle noted each win feels “a little more important than in years past.” Some fans in Washington are already steeling themselves for the Nationals’ second-to-last series of the season, four games against the Phillies at Nationals Park on Sept. 23-26. Then there’s Harper, the man who will likely tie these franchises together for at least the next 13 seasons.

“It’s a whole new rivalry,” said Jenny Harper, a nonprofit vice president not related to the MLB superstar, who has rooted for the Nationals since their return to the District. “It’s about to get uglier than it has been in a long time.”

She attributed the budding rivalry to three causes: Unprecedented competitiveness between the Nationals and Phillies, the fresh wound of Bryce Harper’s departure and the proximity of two culturally different cities. Jenny Harper also predicted increasing animosity between the fan bases because she remembered what Nationals Park was like during the Phillies’ golden era, when it seemed like all of Philly bused down to “terrorize” Nationals fans: