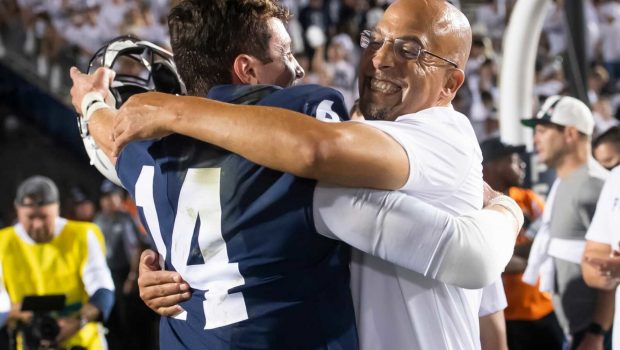 Alabama is the Coaches Poll preseason No. 1, receiving 54 first-place votes. Defending national champ Georgia is third, followed by Clemson and Notre Dame. Texas, at No. 18, received one first-place vote.

Penn State coach James Franklin is among the 66 FBS coaches with a vote in the poll.

Penn State returns 33 letterwinners from the 2021 team that looked like a Big Ten contender early. The Lions went 5-0 and led Iowa by 14 points in the first half before quarterback Sean Clifford and defensive tackle PJ Mustipher were injured.

The Lions fell to Iowa 23-20, beginning a cascade in which they lost six of their remaining eight games. Penn State dropped three straight, including the infamous nine-overtime loss to Illinois, to fall out of the rankings. They concluded with a 7-6 record, falling to Auburn in the Outback Bowl.

Twelve starters return for the 2022 season, including both Clifford and Mustipher. Franklin said Mustipher is “100 percent” ready to return after his season-ending knee injury. Clifford, meanwhile, has “gone at it like a maniac this offseason,” offensive coordinator Mike Yurcich said.

Penn State’s 2022 schedule features nine bowl teams, including three in the first four weeks. The Lions open the season Sept. 1 at Purdue, which defeated Tennessee in the Music City Bowl. They visit Auburn, which loss to Houston in the Birmingham Bowl, on Sept. 17 and conclude the non-conference schedule Sept. 24 against Central Michigan, which defeated Washington State in the Sun Bowl.