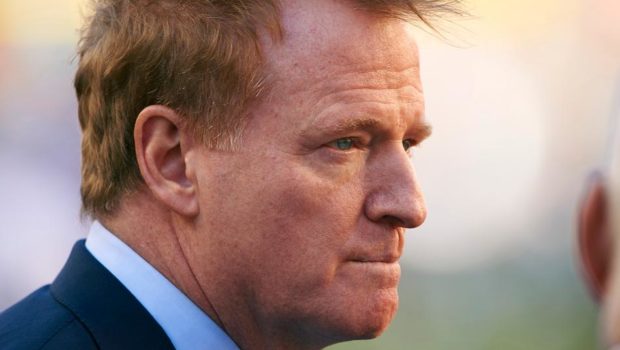 WHY NFL COMMISH GOODELL IS GOING BAT-SHIT OVER HBO’S ‘BALLERS!’

Is it possible that numb-nuts NFL commissioner Roger Goodell is even more thin-skinned than Donald Trump?

It shouldn’t be surprising that the NFL is less than thrilled with some of what goes on in the HBO series “Ballers,” another fictionalized account that provides a look at life in the NFL.

According to producer Mark Wahlberg in an interview with ESPN, NFL commissioner Roger Goodell and several team owners contacted him during the show’s first season to voice their objections. (“Ballers” uses NFL logos without permission.)

Wahlberg said Goodell tried to put an end to NFL players making cameos, though did not specify exactly what measure the commissioner took. Whatever it was, it wasn’t particularly effective. In the first season, the list of current and former players who appeared on the show included Steven Jackson, Antonio Brown, DeSean Jackson, Terrell Suggs, and Larry Csonka. It’s already known that Suggs, Ndamukong Suh and Jarvis Landry have cameos in the second season, which debuts Sunday night.

It’s clear the NFL hasn’t been able to do much to derail whatever “Baller” wants to do, and now the nation knows the show is getting under the league’s skin.