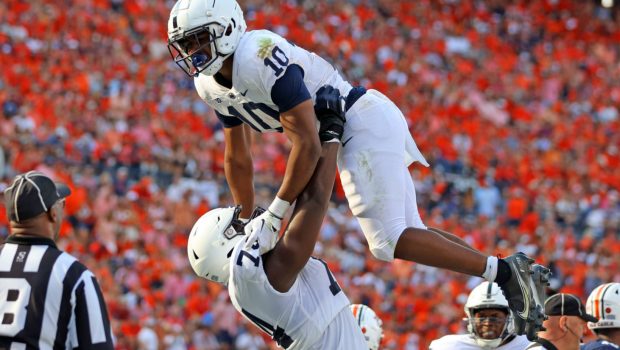 So the Nits’ bowl game choices have been enhanced, with the Cotton Bowl the likeliest:

The Situation: This is Penn State’s most likely NY6 destination.

The Lions’ chances improved greatly with losses by LSU, Clemson and Oregon. In fact, the Lions are in a good spot, since they’ll likely be No. 8 in this week’s CFP rankings. That essentially would assure Penn State an at-large berth in the Cotton Bowl

The Lions’ best bet for Pasadena appeared to involve two Big Ten teams in the playoff, which remains possible.

However, here’s another option:

The Rose Bowl invites Penn State instead of Ohio State, which heads to the Orange Bowl instead.

It’s possible. The Rose Bowl states that, if a conference champ makes the playoff, it “traditionally” would select the next-highest ranked conference team. This season represents a fine opportunity to break tradition. Ohio State likely will be the highest-ranked Big Ten or SEC team, making it eligible for selection to the Orange Bowl. It has played in the Rose Bowl twice since 2018, including last year. Ohio State last played in the Orange Bowl in the 2013 season.

Further, the Buckeyes and their fans are deflated. Meanwhile, Penn State can offer the Rose Bowl an energized fan base on a four-game win streak. The Lions haven’t been there since the 2016 season.

The swap makes sense as a break from that tradition. Penn State coach James Franklin said Athletic Director Patrick Kraft would “handle all these strings.” This might be one he attempts to pull to get Penn State to Pasadena.