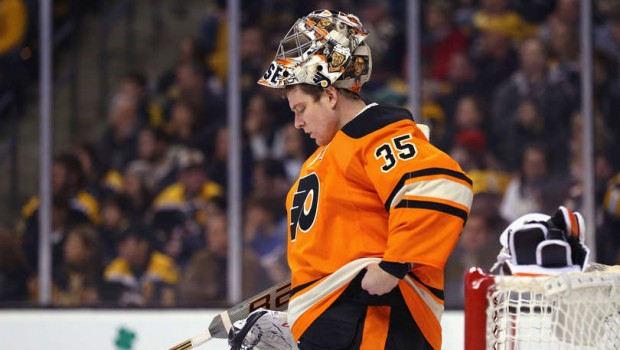 WHY IS UNDERACHIEVING STEVE MASON IN FLYERS’ GOAL TONIGHT?

The now-you-see-em-now-you-don’t Flyers are in St. Louis tonight trying to rekindle the winning energy they had last week.

The orange and black (11-11-6) carried a four-game winning streak into matchups with struggling Columbus on Saturday and the New York Islanders on Tuesday. The Flyers are now left trying to avoid an extended skid, having lost 4-1 to the Blue Jackets and 4-3 in a shootout to the Islanders.

The Flyers fell Tuesday despite a 46-26 shot advantage, including 17-5 in the second period when it scored only once.

Hakstol pulled Steve Mason early in the second period after he gave up three goals on 10 shots, and Michal Neuvirth provided a spark by stopping all 16 he faced. Despite that effort, Mason is expected to return to the net Thursday.

He’ll try to extend the Blues’ recent offensive struggles in the series. St. Louis has gone 2-2-0 in the past four meetings despite totaling two non-shootout goals. The last two matchups at Scottrade Center have been decided by 1-0 scores in a shootout.

Brian Elliott, who gets the nod in goal Thursday, earned the win in the most recent of those March 12 with 28 saves. He bested Mason, who stopped 35 shots and has gone 3-0-1 with a 0.62 goals-against average in his last five games against the Blues.

St. Louis has won four in a row at home over the Flyers.