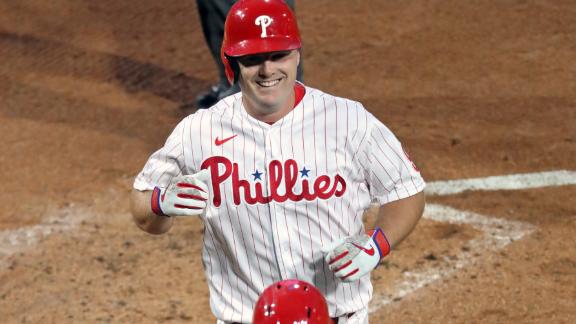 WHY IS THIS MAN SMILING? PHILS WIN AGAIN — THEY’RE A CONTENDER!

Don’t look now, but the Phillies, who started this COVID-shortened season looking lost, are all of a sudden a contender!

Spencer Howard threw five effective innings, Rhys Hoskins homered and drove in three runs and the PHILS beat the Washington Nationals 8-6 to reach 15-15 at the midpoint of the season.

Juan Soto hit a pair of two-run homers and Michael Taylor and Trea Turner also went deep for the defending World Series champions, who fell to 12-20.

The Phillies have won six of seven.

After the Nationals closed within two,

Jean Segura lined a three-run double to left-center in the fourth and scored on Alec Bohm’s sacrifice fly to make it 6-0.

The Phillies needed four innings from their revamped bullpen, which saw its majors-worst ERA rise to 7.09. JoJo Romero retired all four batters he faced before giving way to Hembree. Tommy Hunter got four outs and Brandon Workman finished, giving up Soto’s 11th homer with one out in the ninth.

One thought on “WHY IS THIS MAN SMILING? PHILS WIN AGAIN — THEY’RE A CONTENDER!”