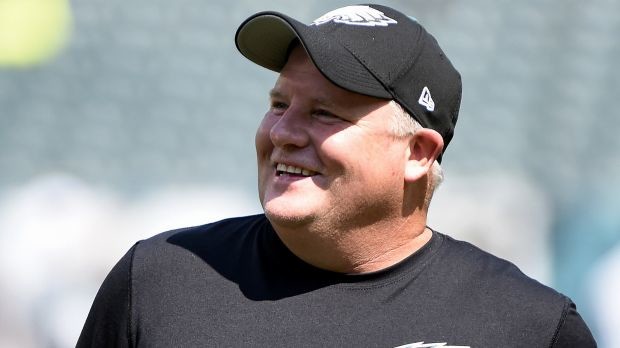 WHY IS THIS MAN SMILING? MAYBE CHIP KNOWS HOW TO FIX EAGLES!

The bed wetters in the lame ass local media have all but written off Chip Kelly and the Eagles for 2015.

That’s because after two games the Birds are not just winless, but they also seem clueless about how to fix their putrid offense and porous defense.

But here are changes that can help:

Based upon the success experienced by Atlanta and Dallas, defenses may have gotten wise to the zone-blocking schemes that have helped the Eagles field one of the league’s most productive rushing attacks the past two seasons under Kelly.

It’s too early to tell whether Kelly made a huge mistake replacing 2014 starting guards Evan Mathis and Todd Herremans with Allen Barbre and Andrew Gardner but the early returns aren’t promising.

Kelly hasn’t won 10 games a year in Philly by accident. He has plenty of talent on this roster to rebound. Plus, there was the chance for early growing pains with Sam Bradford coming off a knee injury in his first season starting at quarterback.

A win against the Jets would go a long way toward lessening some of the outside pressure on one of the league’s most scrutinized teams.