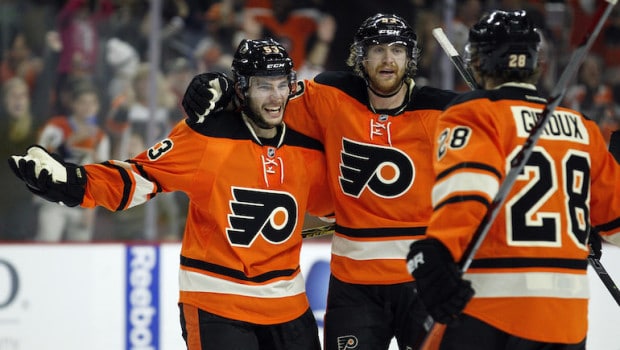 WHY IN THE WORLD WOULD FLYERS SEND THE GHOST TO THE MINORS?

Let me get this straight.

The bad and boring Flyers can’t score to save themselves and home attendance for this once-proud franchise is slipping.

So, they finally have a young player that everyone wants to see — who has personally won two games in a week! — and they are contemplating sending him down to the minors when Mark Streit gets better???!!!

Shane Gostisbehere, who now has three goals and five points in seven games since his call-up from the AHL on Nov. 14, beat the Carolina Hurricanes with an OT goal last Monday, then did it again four days later to put himself in the Flyers’ record book as their first rookie ever to have two game-winners.

Against Nashville, the Flyers blew a 2-1 lead in the final 20 seconds of the third period when Mike Fisher scored, but came away with two points by taking advantage of the Predators being called for too many men on the ice early into the 3-on-3 overtime.

With just under a minute to go on the Flyers’ 4-on-3 man advantage, Gostisbehere took off for the high slot after passing from the left point to Giroux, who was in the left circle.

Giroux looked over his options for a split second, then saw Gostisbehere zipping to open ice and fed up with a perfect pass.

Gostisbehere slowed up, wound up and fired a high blast that got past Preds goalie Pekka Rinne, who was screened by Flyers right wing Wayne Simmonds.

“It’s a fun ride right now and I don’t have any plans of getting off it,” Gostisbehere said. “I’ve never scored that many OT winners in my life, so I mean it’s a surreal moment.”

What a power-play weapon this 22-year-old South Floridian already has become nine games into his NHL career, the first two coming in a short call-up in October 2014.

Gostisbehere still has a lot of improving to do in his all-around game, but his passing and skating and shooting skills are bringing a jolt of excitement to a Flyers team that really needed a lift.

It’s a shame it took veteran blueliner Mark Streit suffering a bad injury to free up an opportunity (as well as cap space) to get Gostisbehere up this season.

You can’t blame the Flyers for starting Gostisbehere in the AHL because he’s still a long ways away from being a complete NHL defenseman … and because he played just seven games as a first-year pro in 2014-15 due to that partially torn ACL that he suffered last November.