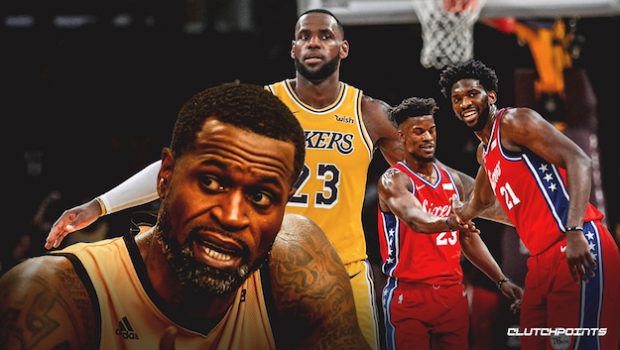 WHY WOULD SIXERS TRADE YOUNG BENNY FOR OLD MAN BRONNY?

Howard Eskin isn’t the only fool with a mic speculating on the future of the Sixers.

Former NBA player Stephen Jackson believes they should try to acquire LeBron James from the Los Angeles Lakers so the Sixers can have a lethal Big Three of James, Joel Embiid and Jimmy Butler.

The Sixers would most likely have to parts ways with Ben Simmons to acquire James from the Lakers, a deal some believe may be explored.

Philly lost to the Toronto Raptors in the second round of the playoffs in seven games.

Jackson believes if the Sixers could somehow get James, they would be the toast of the Eastern Conference:

If Philly could get LeBron James with Jimmy Butler and Joel Embiid, now we’re talking. That’s something I would love to see. If Philly can make that happen, they should be knocking the doors down to make that happen.”

James doesn’t have a no-trade clause with the Lakers. The four-time MVP and Simmons have the same agent, Rich Paul of Klutch Sports.

Simmons is one of the most scrutinized players in the NBA because of his inability to shoot jump shots.

Many believe the lefty is a liability for the Sixers in the half court. He averaged 16.9 points, 8.8 rebounds and 7.7 assists per game during the regular season and did all of his damage in the paint. Simmons took only five shots in the Game 7 loss to the Raptors.

James considered signing with the Sixers last summer before he decided to join the Lakers on a four-year deal. There have been rumors that people are telling Lakers owner Jeanie Buss to trade LeBron, but it would be a shock to everyone in the league if that actually happens.