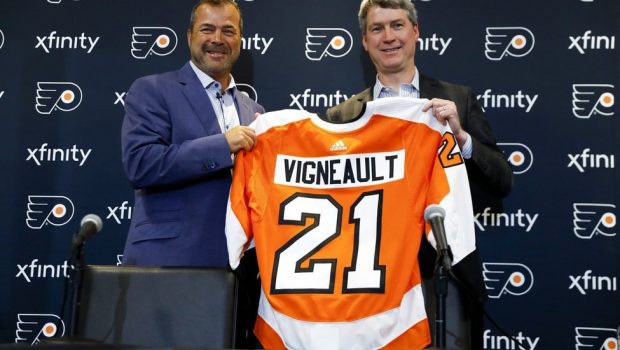 WHY FLYERS ALAIN VIGNEAULT DESERVES NHL COACH OF THE YEAR!

The Flyers are the hottest team in the NHL, and Alain Vigneault deserves much of the credit.

Vigneault (above left with GM Chuck Fletcher) has created a winning culture. He has always been known as a coach that players could turn to and joke around with. This coaching approach can be very valuable, as players who can trust and respect their coach will want to do whatever they can to win for the man. This has been the case for every franchise that he has coached.

Between the Montreal Canadiens, Vancouver Canucks, and the New York Rangers, he has helped lead his teams to the postseason a total of 11 times out of 16 seasons. This includes making the playoffs in nine straight seasons between 2009 and 2017 (with the Canucks and the Rangers). Vigneault also coached two of those teams to the Stanley Cup Final (the 2011 Canucks against the Boston Bruins and the 2014 Rangers versus the Los Angeles Kings). His records during those playoff seasons are below:

Yes, Vigneault was on the losing end of both of those series, but to be able to make it multiple times to the Stanley Cup Final and with two separate organizations shows the type of leadership and mentoring that Vigneault brings to the table.

When the players want to play for the coach, a bond can also be formed amongst the players in the locker room as well. They learn to not only play for A.V., but they want to play for one another. The Flyers this year have been a team that has risen together by committee. There is not only one guy carrying the load; the load is spread out amongst a lot of the roster. Every player throughout the lineup knows what his role is and is not trying to be someone they’re not.

There are guys like Sean Couturier and Travis Konecny who lead on the upper lines, while others like Tyler Pitlick, Scott Laughton, and Michael Raffl do what they do best on their lines. The goal for all of them is to have team success, not just individual success. This idea leads them to run like a well-oiled machine and one that has been able to put on a nice run lately heading toward playoff season.