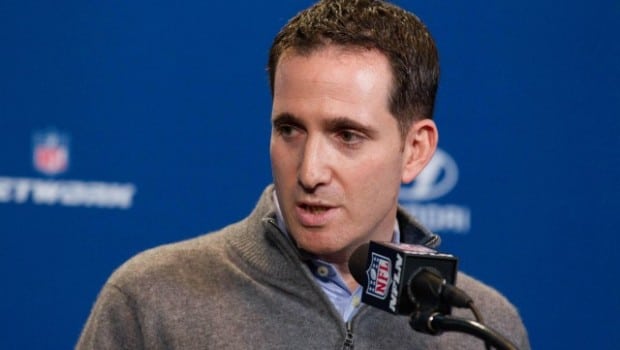 WHY ESPN HAS GIVEN EAGLES AN ‘A’ FOR THIS OFFSEASON

If the offseason is the foundation for a great regular season:

The Eagles will win the Super Bowl!

At least that’s what ESPN thinks, given that the Birds got an “A” for the moves pulled off by Howie Boy Roseman (above):

Finding teams to take the Murray and Maxwell contracts made this free agency period a success independent of whether firing Chip Kelly was the right move for Philly.

The Eagles moving from 13th to eighth in the first-round order is huge because there are nine blue-chip players in this draft, counting two quarterbacks. He thought the Eagles’ trades allowed them to dump salaries while recouping draft capital roughly equivalent to the second-round pick they sent to St. Louis in the Sam Bradford trade last offseason. Dominik credited the Eagles for anticipating the market as well as any team in the league when re-signing their players.

“They went a little steep with Curry, but he will fit Jim Schwartz,” Louis Riddick said. “Bradford is a good fit for Doug Pederson. Nolan Carroll they respected. They paid top money for Brandon Brooks, but needed to do something there. Rodney McLeod, I love how he plays. Chase Daniel should have started over Alex Smith at one point last season. I like Nigel Bradham physically. And then to be able to get rid of Maxwell and Alonso and DeMarco and then moving Mark Sanchez is amazing. I’d be dancing a jig in the middle of Broad Street.”