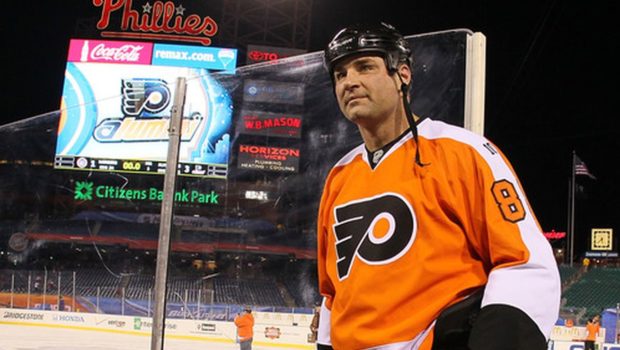 WHY ERIC LINDROS LEFT FLYERS AND WHY HE’S BACK, SORT OF!

In 1998-99, despite the collapsed lung and his second career concussion, Eric Lindros had 40 goals and 93 points and finished sixth in the voting for the Hart Trophy.

He’d play one more season in Philly, putting up 83 points in 55 games and dealing with multiple diagnosed concussions.

A restricted free agent, he refused to sign another contract with the Flyers, largely over what he felt was the mismanagement of his health, and was traded to the Rangers after sitting out the 2000-01 season.

I saw that you recently dropped the puck at Flyers-Penguins. You’ve got the gig with the team, doing outreach. It’s wild to see that the relationship with you and the team is where it is.

It’s a different group there now, right? Things have changed in Philadelphia, and I really have to thank Paul Holmgren for reaching out and being able to confide in him and speak openly about how I felt about the way things ended. It was hours and hours on the phone talking it through. I had a lot of frustration built up, and I was not happy about it.

But at the end of the day, like Homer says, you play for the fans. You play for the people of Philadelphia. To this day, that’s what the players on the ice are doing. We spoke at length about things. Had it not been for him, I wouldn’t be hanging out down there. Right now, I work directly with (Flyers president of business operations Valerie Camillo). I don’t have anything to do with the (hockey side) at all. And she’s been nothing but great. She came in a couple years ago and hasn’t had much of a team to rally around, but hopefully they figure that out.