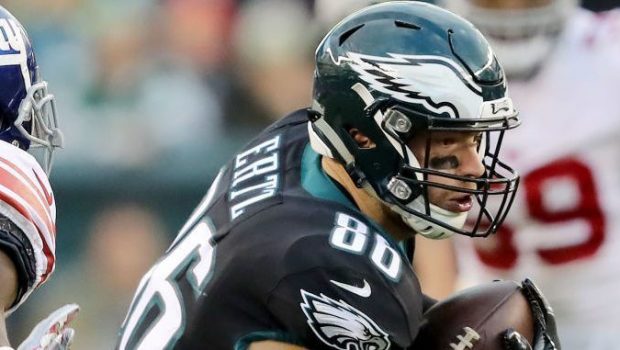 WHY EAGLE ZACH ERTZ IS NFL’S TOP TIGHT END, FANTASY AND FOR REAL!

Twenty Eighteen was an interesting year for tight ends. Among all tight ends this past decade, Zach Ertz ranked second and Travis Kelce third in total expected fantasy points.

However, on the whole, this was a down year for tight ends. In 2018, tight ends combined for just 5,697.5 expected fantasy points, which was their lowest total output over the past eight seasons. We discussed what the lack of parity at the position means for your 2019 fantasy drafts earlier this offseason.

See below for a list of the wide receivers who ranked top-22 in expected fantasy points per game followed by an in-depth look at some of the highlights.

Ertz averaged 16.5 expected fantasy points per game in 2018, which led the position and ranks second-best this past decade – behind only Jimmy Graham‘s 2011 season and not by much (16.7). In terms of expected fantasy point market share (22%), his 2018 season ranks best over the past 10 seasons. He’s ranked first, fourth, and third in expected fantasy points per game over the last three seasons, leading the position. Although Ertz saw better volume than Kelce last season and was almost just as good in terms of production (recording the sixth-most fantasy points by any tight end all-time), he’s being drafted 10 spots after Kelce by current ADP. This is likely due to the team’s decision to acquire DeSean Jackson as well as buzz regarding sophomore tight end Dallas Goedert. Ertz will likely see a decrease in volume next year, but maybe not by much. Jackson has only eclipsed 100 targets once over his past seven seasons and Goedert’s ascension likely hurts Nelson Agholor (more 2TE sets, fewer 3WR sets) than anyone else.