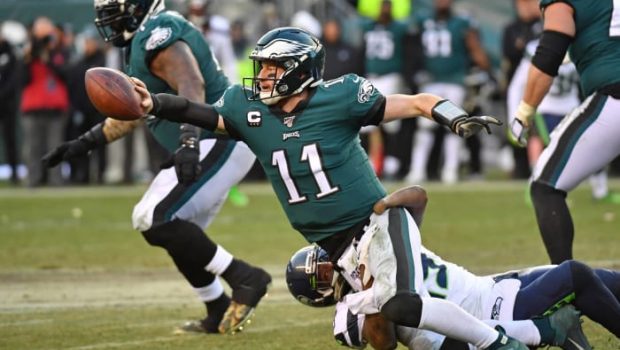 WHY EAGLES WILL BEAT THE DOLPHINS BUT NOT COVER THE 9!

The Eagles are in Miami this Sunday, where they are a 9-point fave over the dreadful Dolphins.

In Week 12 against Seattle, QB Carson Wentz had four turnovers; the short-handed Eagles’ offense had six overall, and Philly continued its run of spotty play with a sloppy home loss.

The Eagles still have games against the awful Giants and Redskins, which means their season might come down to whether they can beat the Cowboys at home Dec. 22. To do that, Wentz must stay healthy (X-rays on his right hand were negative), and be much better.

The Dolphins continued their slide back to the NFL’s basement with another porous defensive performance in a Week 12 loss to Cleveland. QB Baker Mayfield had by far his best game of the season, and Jarvis Landry and Odell Beckham Jr. tormented Miami’s secondary. If head coach Brian Flores wants to rebuild the franchise, he must fix the secondary.

Wentz has taken plenty of flak for Philly’s offensive woes, but his receivers are letting him down, none more than Agholor. He leads the team with four drops; the Eagles have the fifth-most drops and sixth-worst drop percentage in the league.

He leads the Dolphins with 11 quarterback hits, and his three tackles for loss are tied for the team lead. On a team with few solid contributors, particularly on defense, Biegel is playing well.