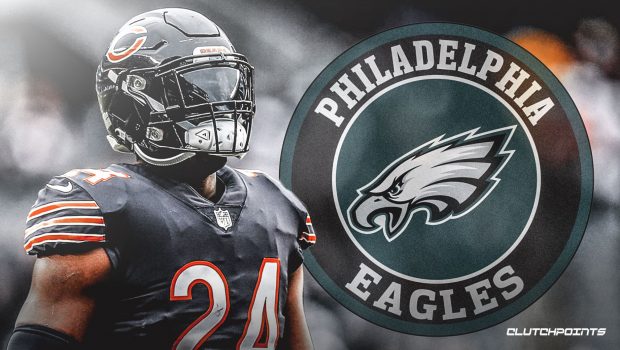 WHY EAGLES TRADE FOR JORDAN HOWARD IS SLEEPER OF THE YEAR!

Eagles OTA start April 15 and the draft is just 10 days later, so:

Their low-risk, high-reward trade for Jordan Howard came more than two weeks after the start of free agency, on a nondescript Thursday evening.

An acquisition that just might’ve filled one of the only holes on Philly’s roster, it was the very definition of a sleeper pickup.

The Eagles were held back by a lack of balance on offense last season. With Jay Ajayi and Darren Sproles sidelined with injuries, the Birds averaged just 98.1 rushing YPG and 3.9 YPC (28th and 30th in NFL). That was a far cry from 2017, when a Super Bowl-winning trio of Ajayi, LeGarrette Blount and Corey Clement guided Philly’s running game to 132.2 YPG (third) and 4.5 YPC (tied for third).

Howard, who is third in the NFL in rushing since entering the league in 2016 (behind only Ezekiel Elliott and Todd Gurley), has the potential to be the lead back that Ajayi, still a free agent, could not be last year.

Even better for Roseman and Co., Howard costs just $2 million in 2019, after which his contract is up. It’s a prove-it year for a 24-year-old running back with high upside. Plus, if Howard performs well and Philly lets him hit free agency after the year, the Eagles can recoup a compensatory pick.

Having escaped from cap hell and filled needs at defensive line and running back, the Eagles can focus on building depth and a future through the draft.

The Eagles have three selections in the first 57 picks and could use them to choose an eventual successor to Jason Peters at tackle or an immediate replacement for Jordan Hicks in the linebacking corps.

Philly should also keep an eye on an extension for Wentz, whom the Eagles might want to pay before Dak Prescott, Jared Goff and Patrick Mahomes get their franchise deals.