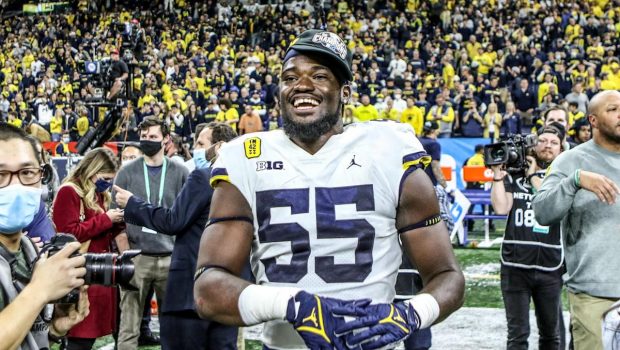 WHY EAGLES SHOULD MOVE UP TO DRAFT EDGE DAVID OJABA!

The NFL draft combine is over, so let’s concentrate on the actual draft at the end of April.

A pass-rush project; Teams here were enamored with Michigan edge rusher David Ojabo, a candidate to go in the first half of the first round and Mel Kiper Jr.’s No. 11 prospect.

Teams believe Ojabo needs to add bulk but that he can, after he weighed in at 250 pounds. And he honestly hasn’t played very much football; he switched from basketball during high school and didn’t play as a freshman in college.

The thought on Ojabo is that if you get him now, you could have a superstar at a critical position in two or three years.

To me, that sounds a lot like the kind of guy the Philadelphia Eagles like to draft, and they have three first-round picks (Nos. 15, 16 and 19). Keep an eye out there.

They could even move up to get an edge rusher if there’s one they really like.