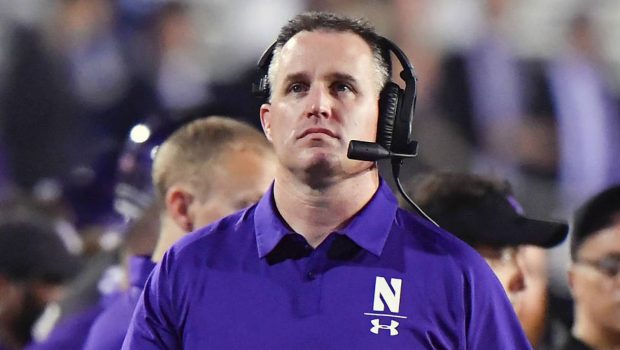 As it is perfectly clear to Eagles fans everywhere, Doug Pederson is an incompetent coach.

He is a terrible play-caller and he imposes no accountability on players who screw up.

Anyone with eyes knows that Jalen Hurts is a better quarterback than Carson Wentz for this team this season.

And yet, after last night’s heart-breaking loss, Pederson couldn’t even bring himself to name Hurts the starter for next week’s game at Dallas.

Pederson should have been fired weeks ago, and only his God knows why Eagles owner Jeffrey Lurie hasn’t pulled the trigger.

Now, it appears the Eagles will miss out on another blue chip coach who will be coveted by other NFL teams.

Many of them are expected to make formal requests to interview Northwestern’s Pat Fitzgerald for their head-coaching jobs after the Wildcats’ bowl game, league sources told ESPN.

Two teams already inquired about Fitzgerald’s availability Saturday afternoon after Northwestern lost to Ohio State in the Big Ten championship game, according to a source with knowledge of the situation.

Fitzgerald, who has won two Big Ten West titles over the past three years and has coached Northwestern to three 10-win seasons, will be one of the highest-demand NFL head-coaching candidates in the upcoming hiring cycle.

Nine NFL teams have inquired about Fitzgerald over the past five years, according to a source close to Fitzgerald’s situation.

Fitzgerald is nearing the completion of his 15th season at Northwestern — his alma mater — and has publicly called coaching the Wildcats his “dream job” on multiple occasions.

But what could change the dynamics of Fitzgerald’s situation this time is this: Just this past week, the ACC hired Northwestern athletic director Jim Phillips as its next commissioner. Phillips and Fitzgerald have a strong, close relationship from having worked together directly for 12 years, and that could play into any decision Fitzgerald makes regarding NFL coaching opportunities.

Fitzgerald, 46, lives in Northfield, Illinois, about halfway between Northwestern’s Evanston campus and the Chicago Bears’ training facility in Lake Forest.

The Wildcats are 6-2 this season and had a first-half lead in the conference championship game Saturday, but Ohio State rallied for a 22-10 victory. Northwestern, which will finish with a winning record for the fifth time in the past six seasons, will find out Sunday where it’s headed for bowl season.