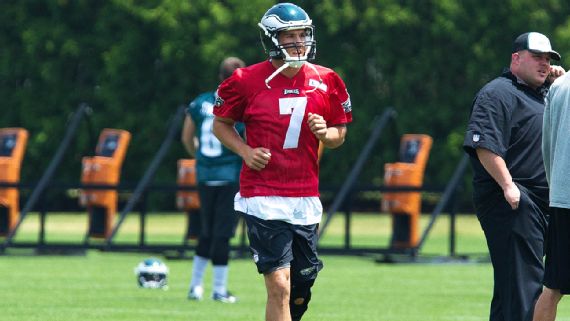 WHY EAGLES’ SAM ENDED HIS STUPID HOLDOUT? FOLLOW THE MONEY!

In case you’re wondering why Eagles quarterback Sam Bradford returned to work on Monday after a silly holdout, ESPN seer Bill Pollian has the answer:

“A lot of money,” Bill Polian said on ESPN yesterday, when asked what is at stake for Bradford this season. “The Eagles can get out of the contract next year by paying him essentially $4 million.

“There likely will be no big payday for him in the future. He becomes nothing more than a journeyman backup. If he has a good year the Eagles can either keep him, can trade him — that’s the more likely scenario — recoup something they gave away for Wentz and then he is in a position where he can demand a long-term extension.”

Bradford finished last season — his first in Philly — with 3,725 yards passing, 19 touchdowns and 14 interceptions in 13 starts. If he can build on the success he had in the second half of the season in which he tossed 10 touchdowns and four interceptions, he could regain at least a modicum of control over the future of his career, at least in Polian’s estimation.

“This is about the money,” Polian said. “It’s about a long-term extension for him in a place where he feels he can be long-term. It all hinges on him playing well. If he doesn’t play well, his career, effectively, as a high-earning quarterback is over.”