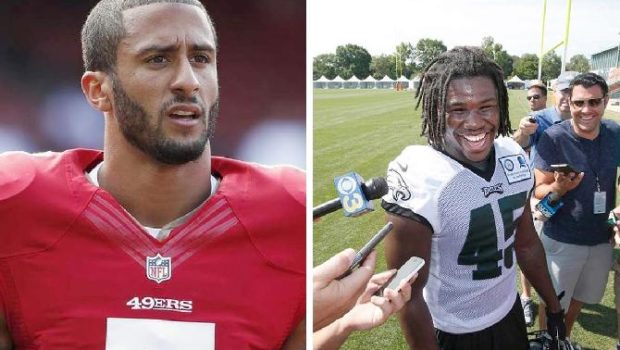 His agent probably talked him out of it because it might have cost him a spot on the final 53-man roster!

So, undrafted Eagles rookie linebacker Myke Tavarres planned to follow Colin Kaepernick’s lead and sit for the anthem prior to Thursday’s game against theNew York Jets.

Then, not so much!

“Oh, I thought about it. Believe me, I definitely thought about it,” Tavarres told ESPN after he nearly decided to sit through the anthem Saturday night in Indianapolis. “And usually I’m front and center on the line with the rest of the guys, and that’s since pre-K all the way up. Saturday’s game, I stepped back, I was in the background, and it didn’t feel right to me at all, and so I will be taking a stand — or sitting down — for the fourth game.”

However yesterday, Tavarres’ agent said his client would be standing during the playing of the national anthem Thursday.