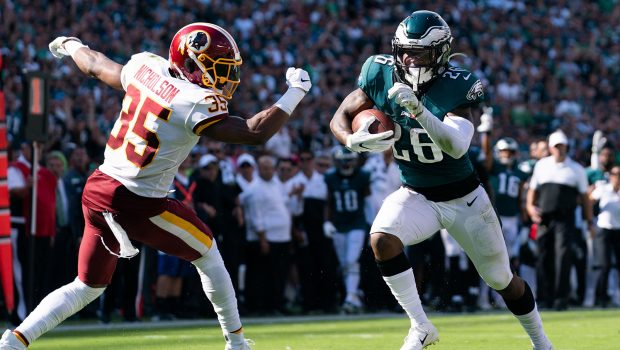 WHY EAGLES RB MILES SANDERS HAS A CHIP ON HIS SHOULDER!

Eagles running back Miles Sanders has a great incentive after his superb rook season.

Sanders said yesterday in a video call that he was disappointed he didn’t win NFL Offensive Rookie of the Year award last season, however, that’ll only motivate him to have a better season in 2020.

Sanders led all NFL rookies in yards from scrimmage with 1,327, including 818 yards rushing. Furthermore, the 23-year-old running back was one of seven rookies in NFL history to run for 800 yards and have 500 yards receiving. However, his spectacular season obviously wasn’t enough to win Rookie of the Year.

Instead, that award went to Arizona Cardinals quarterback Kyler Murray, who also broke many rookie records. Others in the running were the Oakland Raiders running back Josh Jacobs, who had more yards rushing than Sanders.

Nevertheless, the Eagles will certainly need Sanders to stay motivated this season. Eagles head coach Doug Pederson recently told reporters that he plans to have Sanders as the main running back this season. The Eagles, who suffered a disappointing playoff loss last season, will be seeking to make the playoffs for the fourth consecutive season in the 2020 NFL campaign.