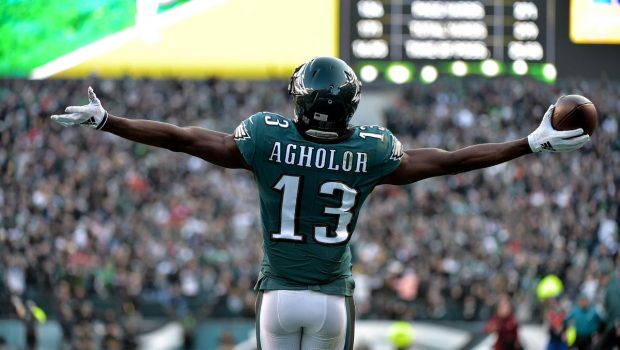 WHY EAGLES NELSON AGHOLOR IS ON THE TRADING BLOCK!

Eagles OTA’s start Wednesday at NovaCare, and it might be the last set of workouts for wideout Nelson Agholor:

With a fully guaranteed $9.3M salary on his fifth-year option, cutting him would not save any money. A trade would clear that entire salary.

Arcega-Whiteside is a totally different type of receiver than Agholor, but his big body, ability to beat press at the line, and unreal high-pointing skills make him a tremendous deep threat. Also, DeSean Jackson was brought back to Philly this offseason, and obviously, his presence is probably more threatening to Agholor’s grip on a roster spot with the Eagles than anything else.

Alshon Jeffery, Arcega-Whiteside, and Jackson are the only legitimate threats at receiver outside of Agholor, but Ertz has to be considered a primary target and 2018 second-round pick Dallas Goedert flashed as a rookie. Strong likelihood there won’t be enough targets to go around with Agholor a part of the pass-catching group.