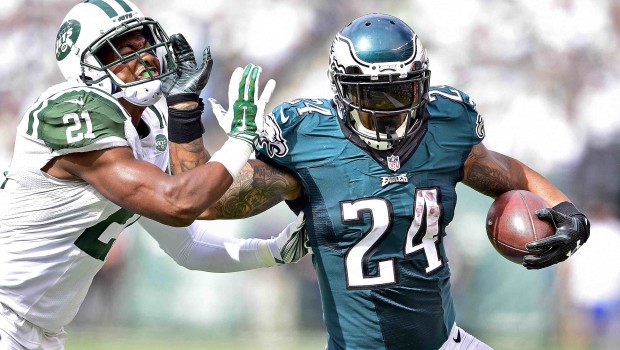 The Eagles offer slim pickings for fantasy drafters, but there are two running backs that will be bargains:

One thing to keep an eye on with the Eagles is coach Doug Pederson’s history with the Kansas City Chiefs. Last year, with Jamaal Charles hurt, the Chiefs won 10 consecutive games with Charcandrick West, Spencer Ware and Knile Davis running the ball. Pederson wants to run the ball, and it will be a focus of the offense.

The other factor: Eagles right tackle Lane Johnson is facing a 10-game suspension for violating the NFL policy on performance-enhancing drugs. Left tackle Jason Peters is 34 and already missed a preseason game with a quadriceps injury. So it is reasonable to wonder how effective the Eagles’ running game can be.

Take the over on both of these projections.

Mathews has a long injury history, but he should be a 1,000-yard back if he can remain healthy while running this offense. He has done that twice in his career, so it’s not impossible. And Pederson’s focus on the run — especially given the lack of big-play weapons at wide receiver — should give Mathews some opportunities.

As for Sproles, Pederson and offensive coordinator Frank Reich have practically gushed about his potential. Pederson loves the short passing game, and Sproles’ ability to create mismatches with defensive players will be impossible to resist. Sproles has some age on him, but he still moves as quickly as ever.

Rookie Wendell Smallwood has been injured during camp, but could also emerge as a productive player — probably worth keeping your eye on as a waiver-wire pickup after a few weeks.