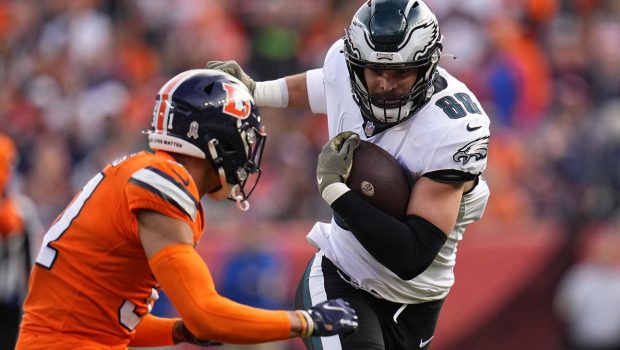 WHY EAGLES DALLAS GOEDERT IS A SLEEPER TIGHT END!

ESPN’s Jeremy Fowler recently ranked the top 10 tight ends in the NFL, and the Eagles Dallas Goedert landed outside the top 5, at No. 6 on the list.

Goedert was the most consistent vote-getter in the next tier of tight ends, appearing on nearly 80% of the ballots.

He is considered versatile for his ability to run routes with nuance and burst; flex into different positions, such as slot tight end or backside receiver; and hold up as a blocker in the running game.

“He’s kind of a sleeper to me,” an AFC personnel evaluator said.

“Never gets huge media praise, but he’s a big, smooth athlete who’s good in both phases of the game — can stretch the seams and also has enough athletic ability to run the route tree.”