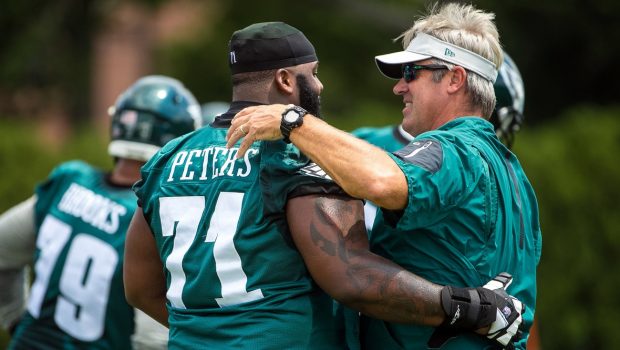 WHY EAGLES BODYGUARD JASON PETERS SWUNG BACK TO LEFT TACKLE!

What a difference a week makes.

Last week Eagles offensive lineman said he wanted more money to swing back to left tackle, where he has been a Hall of Famer since he came to Philly in a 2009 trade.

And then coach Doug Pederson announced yesterday that Peters will be the starter at left tackle for the Eagles in 2020.

How did that happen?

“Jason Peters came into my office this morning. He has decided to slide over to left tackle,” Pederson said. “This is the unselfishness. This is who he is. When we talk about guys and we talk specifically about Jason Peters, this is who he is.

“I was just thrilled to death when he shared the news.”

The same can be said for quarterback Carson Wentz.

“We call him The Bodyguard for a reason,” said Wentz, who will practice fully after a groin injury sidelined him last week. “He always takes care of me. I’m pretty excited he’s back there and I think the O-line’s excited about it and it puts us in a good position going forward.”

Peters was re-signed by the team in July to start at right guard after Brandon Brooks suffered an Achilles injury. Left tackle Andre Dillard incurred a season-ending biceps injury during Training Camp. Matt Pryor took the first-team reps at left tackle through last week’s practices. Wentz was confident that the situation would work out after losing two starters.

“I knew at the end of the day, Jason, the coaches, everyone would put guys in the right position for this team to succeed,” Wentz said.

Who will start at right guard? Pederson said that Pryor is an option along with rookie Jack Driscoll and second-year lineman Nate Herbig.

Pederson also confirmed that the Eagles worked out veteran offensive lineman Cordy Glenn, who has played nearly 100 career regular-season games. The Eagles have an open spot on the 53-man roster.

Getting the offensive line right will be key as the Eagles take on a Washington defensive front that features five former first-round picks, led by veteran Ryan Kerrigan and 2020 No. 2 overall pick Chase Young.

“We have to go off of what he did in college and study his college tape to get a feel for him as a pass rusher, as a defensive end, an edge-setter and then make those adjustments as we go,” Pederson said about Young, the former Ohio State star. “You’re not sure if he’s going to be on our right or our left but at the same time we have to go play and execute and do our jobs and stay within our rules and all of that and do the best we can against that.

“This is a talented group up front, a lot of first-round draft picks in that mix, not only in the D-line, but linebackers as well. … We have our work cut out for us protecting against this front-four, front-six, front-seven type guys.”