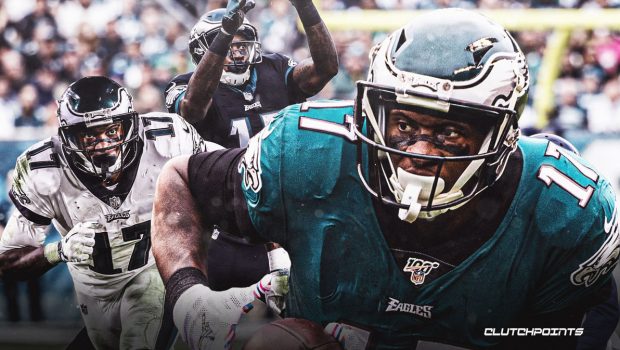 But three facts stood in the way:

His performance in the past two season has pretty much sucked.

During the 2019 season with the Eagles, Jeffery ended up playing in 10 games. He caught 43 passes for 490 yards and four touchdowns.

Looking ahead to 2020, the hope is that Jeffery can stay healthy and bounce back with a solid year. Carson Wentz, when healthy, can be a top-notch quarterback himself. If both players stay healthy, a big year is a very real possibility for Jeffery.

At 6-3 and nearly 220 pounds, Jeffery can still create mismatches against almost any defensive back he faces. He can jump over most defenders, which makes him a massive deep threat. With Wentz, the Eagles love to throw the ball deep and take shots, which favors a healthy version of Jeffery.

A full offseason of recovery should mean a 100 percent healthy version of Jeffery to start the season. DeSean Jackson will also be back on the field after dealing with his own injury issues in 2019. Philadelphia also has talented receivers in rookie Jalen Reagor, J.J. Arcega-Whiteside, and John Hightower around their top two veteran stars.

In other words, the Eagles have plenty of options to take pressure off of Jeffery. Opposing defenses are not going to be able to key in on shutting down Jeffery.

The presence of Miles Sanders in the backfield also makes the Eagles’ offense more intriguing. Sanders showed off potential star ability in 2019, which will force defenses to stay honest against the run. That should also create more mismatches and opportunities for the deep ball, especially off of the play action.

Assuming he stays healthy, Jeffery should be able to rack up around 65 receptions for 900 yards and seven touchdowns. Those numbers don’t make a WR1 for fantasy football players, but he could be a solid WR2 or WR3. He could also slide into the FLEX.

Expect to see the Eagles look to get Alshon Jeffery involved early and often. He may be 30 years old now, but he still has some good football left to be played. If you’re later on in your draft and Jeffery is available, scoop him up and he might just help you contend for your league’s championship.