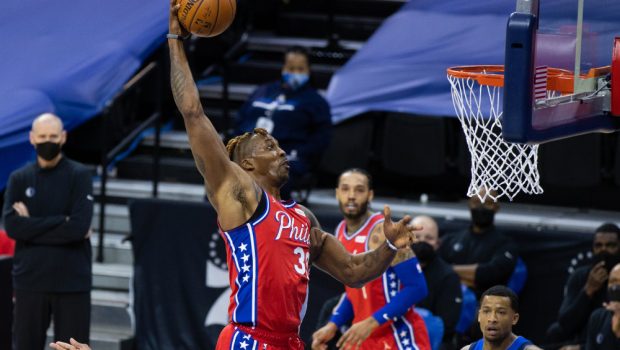 Dwight Howard demonstrated last night why the Sixers snapped up the 17-year veteran when he became a free agent after helping the Lakers win the title last season:

He had 14 points and eight rebounds in the win over Dallas and he allowed Joel Embiid to rest down the stretch.

“He was awesome tonight and he did it against a small lineup, a big lineup,” coach Doc Rivers said. “He dominated the glass, man, when he plays like that and is focused like that, he’s fantastic. This is one of the best games he’s had for us and he’s been good overall, but tonight, I thought he really stood out.”

Howard also threw down one of his classic old Superman dunks late in the game to really seal the win. That was something not expected this late in his career.

“It feels great to get out there and just play the game that I love at the highest level,” Howard said with a smile. “When I got the chance to come down the lane, I was thinking what Sam Cassell always tells me ‘You one dunking fool Dwight! So you go out there and you dunk every time!’ So that’s what we’ve been working on and it worked tonight.”