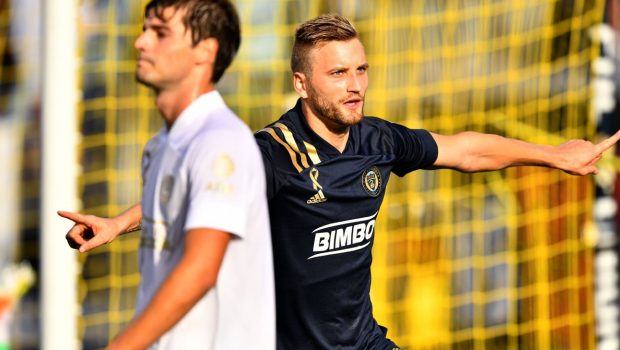 WHY DON’T SIXERS JUST SELL SIMMONS AS THE UNION DID PRZYBYLKO!

The Union sold one of its best players to the Chicago Fire for $1.15 million:

Excuse me, but this is what baffles many about soccer in general and the MLS in particular.

You trade one of your best players and you don’t get a player of equal value in return?

Imagine if you will, that Daryl Morey tired of the criticism and decided to sell Ben Simmons to the highest bidder?

I don’t even know if the NBA allowed such a thing.

But if it did, Morey would be run out of town on a rail.

He wants equal value, as he should.

Przybylko, 28, will be under contract with Chicago through the 2023 season, with the GAM split evenly across the next two seasons.

Przybylko led Philadelphia with 12 goals and added four assists in 34 games (29 starts) in 2021. He had 35 goals and 14 assists in 83 matches (77 starts) over three seasons with the Union and helped the club win its first Supporters’ Shield in 2020.

Only Atlanta United’s Josef Martinez (38) and the Seattle Sounders Raul Ruidiaz (37) scored more goals over the past three MLS seasons.

Przybylko competed professionally in his native Germany from 2011-18 before joining Philadelphia.

He has a U.S. Green Card and will not occupy an international slot on the Fire’s roster.