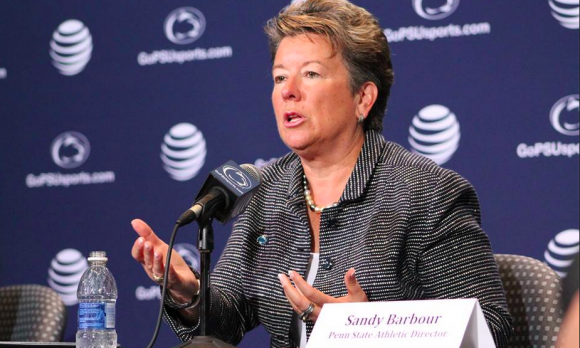 WHY DID PENN STATE HIRE THIS WOMAN TO RIGHT ITS ATHETIC SHIP?

Landing on your feet is one thing. Sandy Barbour’s latest career twist is something else entirely.

Widely presumed to have been forced out of the Cal athletic director’s chair only a month ago, Barbour was announced Saturday as the new AD at Penn State, replacing the retiring Dave Joyner.

“Sandy is an excellent fit for Penn State and the Big Ten,” Barron said in a statement. “She stood out among a highly qualified pool of candidates. I am excited by her energy, her experience and her knowledge of intercollegiate athletics. I look forward to working with her to further strengthen Penn State’s rich athletics tradition and student-athlete success.”

Barbour’s contract (PDF) is a five-year agreement that will pay her an annual salary of $700,000.

Though Barbour did not shy away from questions about her Cal tenure when meeting the press, those questions will not likely disappear anytime soon. Though Barbour was a highly successful fund-raiser who pushed through a pricy renovation of Cal’s earthquake-vulnerable Memorial Stadium, the Bears suffered though struggles with their graduation rates — a recent report showed Cal with the lowest such rate for any major college football program at 44 percent — and budget issues, with the renovation project leaving the athletic department in substantial debt.

Though Barbour succeeded with several of her hires (notably men’s basketball coach Mike Montgomery), her 2012 decision to fire Jeff Tedford and hire Louisiana Tech’s Sonny Dykes did not pay off in Dykes’ first season, a 1-11 disappointment in which the Bears failed to defeat an FBS team.

Joyner announced his retirement last month after nearly three years spent as the Nittany Lions athletice director. A former Penn State trustee, Joyner replaced Tim Curley in 2011, after Curley was dismissed in the fallout from the Jerry Sandusky scandal.