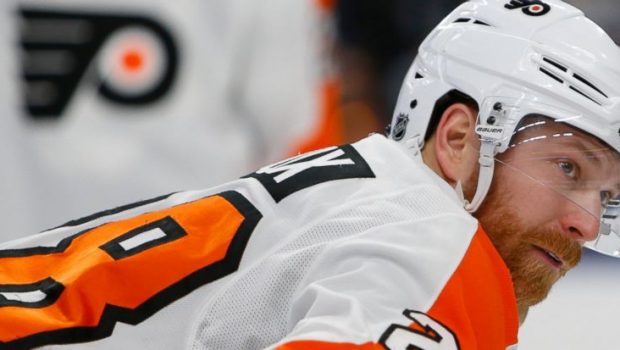 Over the past two seasons, only four players — Nikita Kucherov, Connor McDavid, Nathan MacKinnon and Sidney Crosby — have scored more points than Claude Giroux and his 187. But after five games, Giroux has a mere three assists, one of which came in garbage time Wednesday. He doesn’t have a single point at even strength. And he’s yet to light the lamp. What’s the problem?

Most likely, there isn’t one. Giroux is actually both shooting the puck more and creating more scoring chances at 5-on-5 than he did in his previous two banner campaigns, which counters any worries his “slow” start is an early sign of a player in rapid decline. He’s even blowing away his previous high-danger chance and individual Expected Goal creation totals, which is especially impressive considering that prior to Wednesday night the NHL wasn’t even tracking tight-to-the-net chances properly. (Basically, they were incorrectly recording in-crease shots as being taken a couple feet outside the crease area.) Even with that limiting his results, Giroux was still peppering the net with dangerous opportunities.

Giroux has hit three goalposts, a total that easily leads the team and is more of a fluke than anything else. As for the lack of assists, the Flyers have somehow scored just one goal on 40 shots with Giroux on the ice at 5-on-5 — a ghastly 2.5 percent on-ice shooting percentage that simply will not stay that low. It’s especially bound to increase if the Flyers continue to bulldoze opponents territorially when Giroux skates; they’ve built up a 79-51 shot-attempts edge and 41-23 scoring-chance advantage with Giroux on the ice. This isn’t a case of Giroux and his teammates not getting chances. They are. They’re just not finishing.

Now, all of this doesn’t mean Giroux is destined to break out of his mini-slump immediately. On Wednesday night, he looked the part of a player gripping the stick a bit too tightly in search of his first 2019-20 goal; the captain does have a tendency to overdo it when bounces aren’t going his way. In addition, his placement on the right side of the top power play unit cuts down his goal-scoring potential by neutering his one-timer — he’ll likely have to generate the lion’s share of his PP value via assists as long as that structure holds.

But considering the strength of his process and track record of scoring prowess, Giroux shouldn’t stay below the point-per-game threshold much longer.