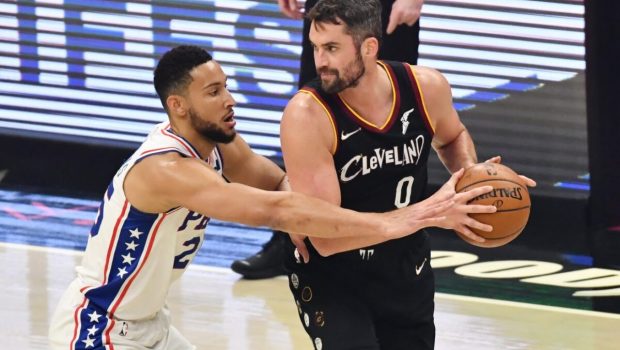 WHY A SIMMONS TRADE WILL HELP SIXERS WIN THE EAST!

Last night’s win in San Antone lifted the Sixers record to 27-19, just 2 1/2 behind the first-place Miami Heat in the Eastern conference.

And they did that without Matisse Thybulle, Danny Green, Seth Curry and Shake Milton.

Not to mention Ben Simmons.

The crybaby holdout has blown a hole in the Sixers boat with his witless holdout, but Philly has stayed afloat.

And a Simmons trade would go a long way toward winning the East.

It’s not a great year in what should really be called the Least.

Ever since LeBron James’ departure from Cleveland, parity has increased — Philadelphia has been a staple in the playoffs over the past seasons, but this year could be the time for them to win the East.

This is especially true with Kevin Durant out for an extended period and Kyrie Irving still just a part-time player. Another top contender in the Chicago Bulls is dealing with a bunch of injury woes, and no other team has separated itself from the pack, including the defending champion Milwaukee Bucks.

The wing and combo guard positions are where Morey can focus on as he prioritizes certain individuals he could acquire to flourish under the tutelage of Doc Rivers. Legitimate shooters, like Curry, are one key ingredient who must surround Embiid, or even superb wing stoppers to help Thybulle and Green.

Simmons is a rare breed of talent at 6-foot-10 with guard-like skills, but he’s not close to an untouchable asset. His value is still at a phenomenal level, so Morey must take advantage of it before it’s too late. It will be tough to let go of Simmons without getting a bona fide superstar back like Morey wants, but he must prioritize the long-term development and outlook of the franchise under their best player in Embiid. The fans from The City of Brotherly Love are eager for their first NBA championship since 1983, and that’s not far from the realm of possibility this season with Embiid at the helm in a wide-open East.

Embiid simply could use more help, so trading Simmons now for a strong package is the way to go as the Sixers try to win a title this season.