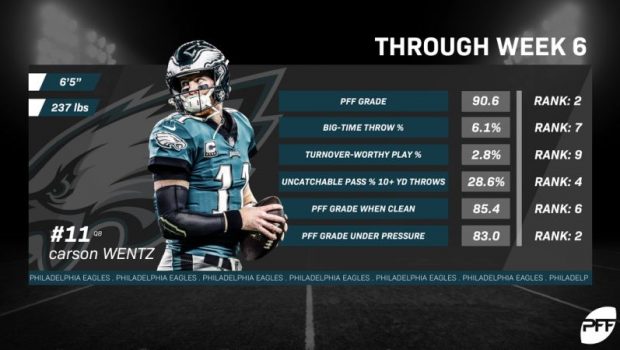 Eagles quarterback Carson Wentz through Week 6 is ranked 26th in completion percentage, 26th in yards per attempt and 18th in passer rating.

Then you’d notice the Eagles’ 3-3 record, and would likely assume Wentz was the primary reason for the early struggles in Philly.

This, however, is not even close to the case.

Through Pro Football Focus’ player grades and advanced database that is utilized by all 32 NFL teams, if Wentz isn’t to blame for their mediocre start, who is?

Through six weeks, Wentz is PFF’s second highest-graded quarterback at 90.6 (one-tenth behind Seattle’s Russell Wilson). By limiting the turnover-worthy plays (2.8 percent rate, ninth of 32 qualifying quarterbacks) and by making jaw-dropping, big-time throws (6.1 percent rate, seventh of 32), Wentz had been nothing short of elite to start the year.

Moreover, Wentz is working with one of the league’s top play-callers in Doug Pederson, who comes straight from the Andy Reid coaching tree. In this system, you’ll see a lot of run-pass options (RPOs), a balanced 2×2 attack, personnel packages that’ll almost always have just one running back on the field, and a decent amount of play-action.

When running out of play-action, the Eagles’ offense ranks third in expected points added (EPA) per pass play and Wentz has recorded the second-highest passing grade at 91.5. (For the layman, EPA puts yards gained on a play into context like down, distance and field position to best measure per-play efficiency.) Nonetheless, Wentz is thriving in one of the league’s most efficient offenses.

When PFF studies quarterback play, one of the biggest indicators of how good an individual really is as a passer is their performance on throws of 10-plus yards. In Wentz’s case in 2019, he has been as precise as they come on downfield throws, ranking second only to Aaron Rodgers in PFF passing grade. Along with that, Wentz has the fourth-lowest rate of uncatchable passes thrown 10-plus yards and has thrown the fifth-most big-time throws with 13. Safe to say, Wentz is a sharp passer.

While passing performance under duress is a volatile area as opposed to passing from a clean pocket, it’s a great metric to consider when examining if a quarterback can create outside of structure. Wentz’s passing grade from a clean pocket is still very good relative to his counterparts, ranking sixth overall. However, his best play is in situations when hit with pressure. Currently, there are only three quarterbacks to record a passing grade above 70 when under pressure: Wilson at 87.5, Wentz at 83.0 and Rodgers at 76.7. That’s pretty good company.

When examining the dropbacks when his first read wasn’t there and he was forced to look elsewhere, the great results still held for Wentz. On those plays, Wentz’s 85.2 passing grade ranks third, his five big-time throws rank tied for second (with Tom Brady), his 11.4 percent uncatchable pass rate ranks first, and his 77.6 percent of yards being in air ranks first.