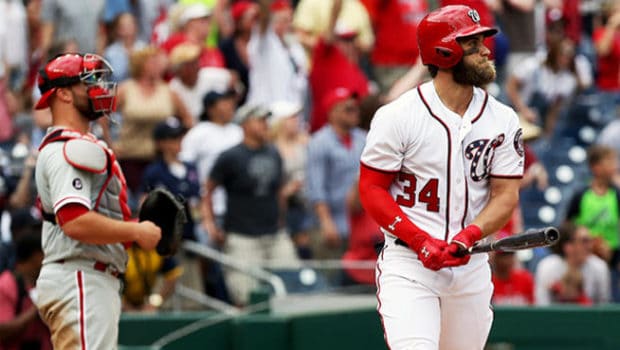 Bryce Harper hit a two-run homer in the third inning and a game-ending, three-run drive with two outs in the ninth, leading the Washington Nationals over the Phillies 6-4 yesterday at Nationals Park.

“[Joaquin] Benoit’s tough with that devastating changeup he throws,” Harper said. “I thought he was going to throw it there 3-2, but he left one up.”

Harper had worked the count full against Benoit (0-1) before driving a 97 mph fastball to center for his fourth home run this season. It was Harper’s fourth game-ending homer, his first since May 9, 2015, against Atlanta’s Cody Martin. Harper has hit 18 of his 125 big league homers against the Phillies.

“I made a mistake and he made me pay,” Benoit said. “No excuses.”

Harper’s first home run, a two-run shot off Jerad Eickhoff in the third inning, broke a 1-1 tie. The Nationals trailed 4-3 in the ninth when Benoit walked Chris Heisey with one out, and Adam Eaton singled before Anthony Rendon flied out.

“The thing that really got Harper up was the walk to Heisey,” Phillies manager Pete Mackanin said. “Walks seem to score when we issue them.”

Washington has won 15 of its last 19 games against the Phils.

The Phils took the lead in the ninth when Aaron Altherr doubled off Blake Treinen leading off and scored from third when, with the infield in, Freddy Galvis grounded to second baseman Daniel Murphy and catcher Matt Wieters dropped the throw on what was scored a fielder’s choice.

Shawn Kelley (2-0) relieved with the bases loaded and got Maikel Franco to ground into a forceout.

“Kelley came in and got that big out,” manager Dusty Baker said. “Blake was struggling. These guys have played us tough. It’s come down to the last at-bat four of the six games we’ve played them.”

Eaton and Rendon hit consecutive doubles in the bottom half off Eickhoff, who allowed three runs and eight hits in six innings.