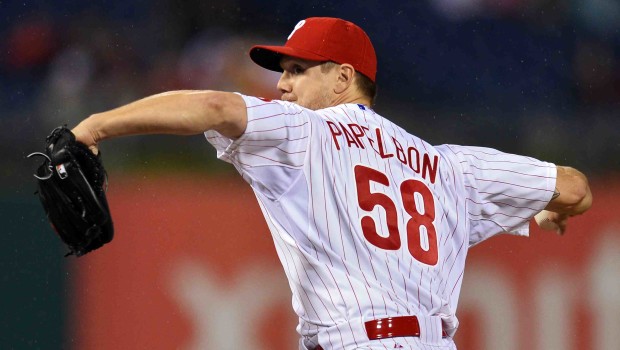 WHO WILL THE PHILS DUMP BEFORE THE JULY 31 DEADLINE?

According to Jon Heyman of CBSSports.com, the Phillies have the potential to hold an interesting sale if they choose to shop some of their longtime stars. At the very least, they’re likely to offer closer Jonathan Papelbon and much of their mostly unproductive outfield. Here is his take:

Jonathan Papelbon — He’s having a nice year despite reduced velocity, and the Phillies really need to trade him because he doesn’t appear to be a clubhouse fit. They could use the $12 million a year in relief, too. With that salary, he could be an August trade, but the sooner he moves, the better. The Phillies also happen to have a closer in waiting, Ken Giles (no relation to longtime Phils owner Bill Giles), who can throw 99 mph and may carry the potential to be their Craig Kimbrel, or at least a reasonable facsimile.

Cliff Lee — The contract is heavily backloaded, so he ain’t cheap. But with only a couple years left, he may be worth the risk as a rare true No. 1 pitcher — provided he’s healthy. The Yankees have coveted him for years.

Cole Hamels — One GM thought the Phillies might listen on Hamels, if only because he would bring the best return of anyone on the roster. He has performed brilliantly but looks a bit frustrated at times with the lack of support. He has a limited no-trade clause.

Marlon Byrd — Word was the Phillies were open to talking about any of their outfielders, and Byrd is having the best year of the bunch. He would fit Boston’s current need, but of course he was awful there the first time.

Chase Utley — He doesn’t want to go and the Phillies don’t want to trade him. Would help the Jays and maybe the Orioles. Big, big long shot.

Jimmy Rollins — He doesn’t seem enthused about a trade (though he has said he might consider one), and his standing as the all-time Phillies hit leader seems to register in Philly. Top prospect J.P. Crawford might be ready in two years, which may be Rollins’ more probable exit time. Beyond all that, it would probably take an injury for there to be real interest in his $11M salary.

John Mayberry Jr. — Like we said, Philly will talk about its outfielders. Mayberry seemingly has been on the block forever.

Domonic Brown— Mayberry’s teammate possibly could go too, as a change-of-scenery candidate.

Ben Revere — He might interest someone looking for a leadoff hitter and speed (possibly the Giants if it’s determined Angel Pagan won’t return from a back injury soon).