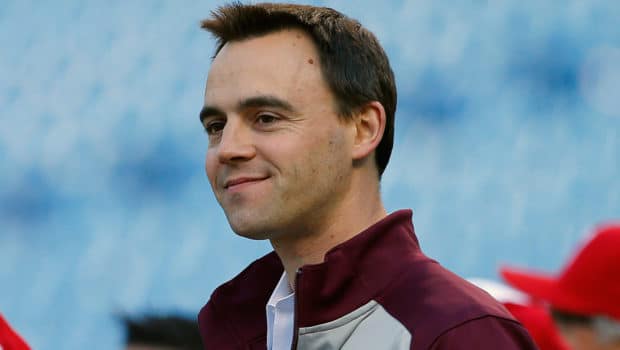 WHO WILL PHILLIES’ GM KLENTAK TAKE WITH TOP PICK IN MLB DRAFT?

So, Matt Klentak, who are you going to pick with the Phillies’ first overall pick in the MLB draft next Thursday?

“We’ve got a lot of evaluators that have been doing this a really long time,” Klentak told MLB.com yesterday. “I’m enjoying listening to these guys talk and dissent different tools, different strengths and weaknesses of some of these players. We’re trying to get it right. We’re listening to everybody and gathering all of the information we can to put ourselves in the best position to get it right.

“There’s a degree of expectation that comes along with being the first overall pick — and for good reason,” he said. “So we need to make sure, as we do with any draft selection, but how well is a player going to handle the expectations, the pressures, the money, the attention. All those things. That’s definitely a piece of the puzzle we’re considering.

“I think most importantly, and this isn’t specific to the first round, we want to take players that want to play professional baseball. That’s the most important thing,” said Klentak. “Some guys want to go to college. And if that’s the case, we need to know that.

“Some guys have certain figures that they want to buy them out of college, and we need to know that. I think it’s important to gather information about their scouting reports, their statistical information, their medical information, and there’s financial information. We need all of that to make the right decisions.”

Klentak stressed that the goal is to have a successful Draft from top to bottom. He said he doesn’t necessarily have a preference if the first overall pick is a high school or college player, and that he expects a mix throughout the process.