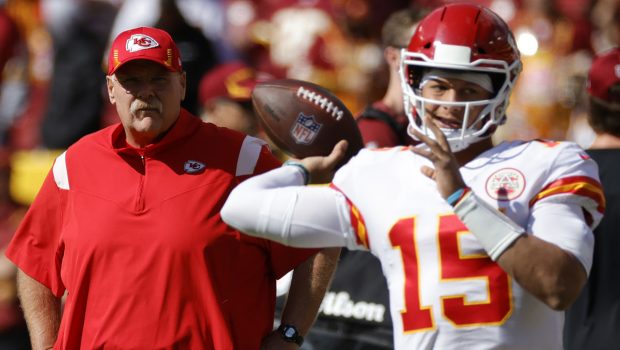 WHO GETS BLAME FOR CHIEFS STUNNING CHOKE JOB, REID OR MAHOMES?

They’re pointing fingers in Kansas City after the Chiefs’ collapse in Sunday’s loss to the Bengals in the AFC championship game that cost the Chiefs another spot in the Super Bowl.

Is quarterback Patrick Mahomes to blame?

The Kansas City Star is running a poll:

After touchdown drives on their first three possessions, the Chiefs failed to score at the end of the first half despite being on the 1-yard line.

They then went punt, punt, interception, punt, punt, field goal on the final play of the game.

They had to settle for that field goal despite having a first down on the Bengals’ 5-yard line as Mahomes was sacked twice.

The Chiefs didn’t gain any yards in OT before the interception.

The Bengals scored on four of their final six interceptions in regulation and then drove into field-goal range and won the game.

It wasn’t just the offense.

One week after Bengals quarterback Joe Burrow was sacked nine times by the Titans, the Chiefs defense got to him just once.

So what is the biggest reason for the Chiefs’ loss?