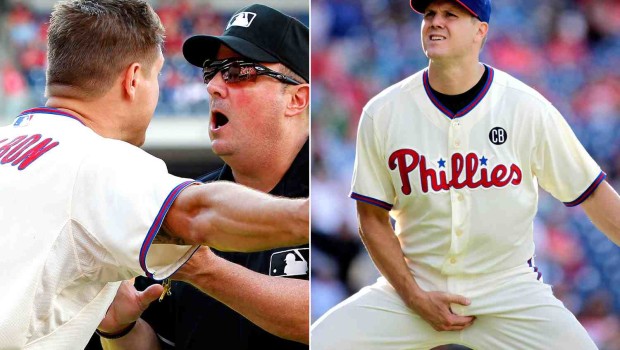 So, whining loser Jonathan Papelbon grabbed NL MVP favorite Bryce Harper by the neck because he didn’t approve of his lack of hustle in the eighth inning of yesterday’s 12-5 Phillies win over the Washington Nationals.

No one in Philly is surprised by this.

Papelbon, who was a world class closer for the Red Sox, was signed by the Phillies after the 2011 season and immediately began spilling his bile in Philly.

No matter what happened on the field, and he was a very good closer in Philly who had moments of incredible ineptitude, Papelbon always got into trouble with his mouth.

And nothing got Phillies fans hotter than his crotch grab to the fans last September (photos above).

Thanks to CSNPhilly.com’s Jim Salisbury, we give you Papelbon digging his hole deeper:

First, he expressed regret for the altercation with Harper.

“I’m in the wrong there,” said Papelbon, who confronted Harper about not running out a ball before applying a choke grip when things got heated.

Later, Papelbon motioned aside a Philadelphia reporter in the Washington clubhouse and expressed regret for comments he made two weeks ago during his return to Citizens Bank Park. At that time, Papelbon questioned some of his former teammates’ desire to win and claimed that they did not always “post up.” The comments did not sit well with Phillies players, who were more than happy to beat Papelbon on Sunday.

After Sunday’s game, Papelbon told CSNPhilly.com that his comments two weeks ago weren’t meant to be about his former teammates, but rather about team management.

“It wasn’t about the players,” he said. “It was about the difference between the front office and the players. They’ve got players that want to win and want to become every-day big leaguers. It was just hard for them to be put in a situation for that to happen because the front office never allowed that.”

Papelbon said he did not have a problem with management entering a rebuilding mode. He just wishes the front office hadn’t announced its intentions.

“It was more along the lines of my frustrations at them coming out and saying we were rebuilding,” he said. “When you say that, you don’t trust your players to win. It doesn’t give them the chance to win.

“They should have never said that. You take the field and let your young players develop. Let them play. That put us all in a tough spot from the get-go of spring training. It cast a shadow over everything from Day 1. That’s what I was getting at, whereas the players fought every day trying to scrape together wins. That’s what it was geared toward.

“I think the players know where I was coming from. Guys I played with know my passion and the way I play the game. You don’t have very many opportunities in this game to play it the right way.”

Trying to choke a teammate — the best player in the National League this year — in the dugout isn’t necessarily playing the game the right way. Even if that teammate was guilty of not running out a ball, which is also a violation of baseball standards.

“It’s a long season,” he said. “It’s a grind. Sometimes emotions spill over and that’s what happened today.

“I’ve talked to Bryce and told him how I feel. We’re on the same page now which is good. I grew up with brothers. He grew up with brothers. I view him as a brother of mine. Sometimes in this game there’s a lot of testosterone. There’s a lot of intensity that spills over. I think that happened today. For me, I can’t allow that to happen in the middle of a game. You can handle that after the game, allow the manager to handle that. In that light, I’m wrong.”

Papelbon and Harper got sideways with each other when Papelbon threw at Baltimore’s Manny Machado last week. Harper was critical of his teammate for that.