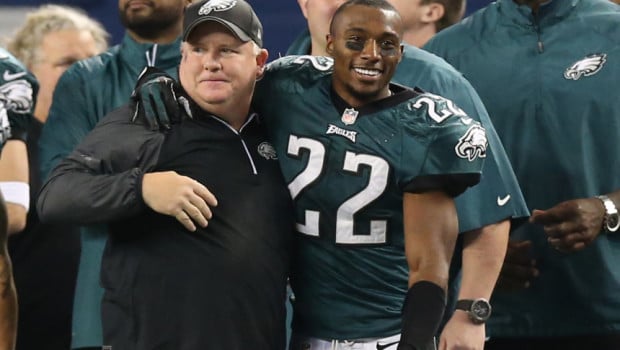 Like a lot of folks, I watched intently last night as the Patriots won their season opener over the Steelers 28-21.

Especially because there is still a lament among the blowhard talk radio set in Philly about Brandon Boykin, whom Chip Kelly (above) traded for a draft pick a few weeks ago.

You remember Boykin, the Birds’ nickel back who had a very productive 2014 but couldn’t make it as an every-down cornerback. And, of course after he was traded to Pitt he implied that the reason had something to do with Kelly inability to communicate!

Well, now he is on the Steelers, and head coach Mike Tomlin seems to agree with Kelly.

The stat sheet says that he played — I missed it — but after the “1” there is nothing but goose eggs — he didn’t make a tackle, break up a pass or anything else — he didn’t do a thing!

When Antwon Blake and Will Allen started over Cortez Allen and Shamarko Thomas that should have set off more than a few red flags. Mind you that Cortez Allen and Thomas, two players looking to rebound after rather forgettable 2014 seasons, are supposed to be two players that the Steelers are counting on. On Thursday, they couldn’t even be counted on to start. Their replacements, Antwon Blake and Will Allen, fared little better.

The closest thing to dependable the Steelers have on the back end are 30-year-old cornerback Will Gay and the 33-year-old Cortez Allen. The organization once thought so highly of each. They are now both in their second stints in Pittsburgh. The inability to draft and develop defensive backs hasn’t quite reached critical mass, not in Week 1, but it’s not particularly encouraging.