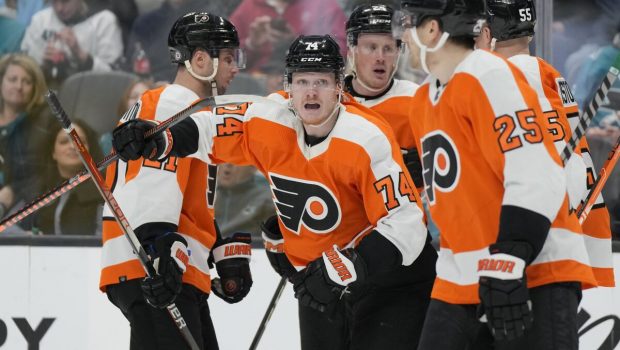 WHILE YOU WERE SLEEPING, FLYERS WON THE GAME OF THE YEAR!

Tony DeAngelo scored 1:10 into overtime after the Flyers rallied from two goals down in the third period to beat the San Jose Sharks 4-3.

“I just liked the way we stayed with it and found a way to finally win in overtime today,” coach John Tortorella said. “We did some good things. … We found a way.”

The Flyers tied the game with 2:05 to play in regulation after pulling the goalie. Travis Konecny’s shot deflected off a San Jose defenseman and into the net for his second goal of the game.

Philly won it when Ivan Provorov set up DeAngelo in transition for the tap-in goal, giving the Flyers their first win in eight games that went to overtime or a shootout this season.

“That’s a lot of points left on the table,” DeAngelo said. “It was good to get the extra one tonight. So many one-goal games of late it was nice to get two points.”

Owen Tippett also scored for the Flyers in their first game of a three-game California swing.

Samuel Ersson made 25 saves to earn his first win in his second career start, bouncing back after allowing five goals in his debut against Carolina last week.