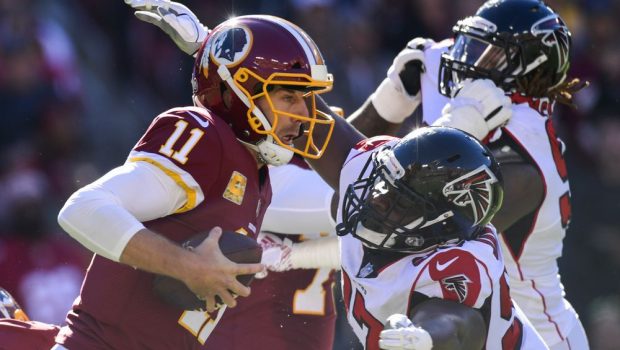 WHILE EAGLES RESTED THEY GAINED ON THE REDSKINS IN NFC EAST!

The Eagles were on their bye break yesterday.

And they gained on the NFC East-leading Washington Redskins, who fell to 5-3 and lead the Birds by a game.

Julion Jones and the Atlanta Falcons blew out the Redskins 38-14 and extended their winning streak to three games.

The Falcons (4-4) made plenty of plays in flexing their offensive muscles with the kind of balanced attack they’ve lacked in an injury-marred season that so far has failed to live up to expectations. Matt Ryan completed 26 of 38 passes for 350 yards and four touchdowns, including the 35-yard screen to Jones that set off a team-wide celebration.

Even though losing four of its first five games didn’t give Atlanta much to celebrate, putting up 491 yards on Washington has players excited about their current position and what more they can accomplish this season.

“The start to the season was not what we were looking for, but we’re halfway through it, we’re 4-4 and we’re in the mix,” said Ryan, who had touchdown passes of 39 and 10 yards to running back Tevin Coleman and a 40-yarder to rookie receiver Calvin Ridley .

“The good football teams that I’ve been a part of in my career are the ones that have gotten better as the year’s gone along. Halfway through, I think we’re a better football team than we were at the start and we’ve got to keep it trending in that direction.”

Nowhere is that progress more evident than on the ground, where Coleman ran for 80 yards and Ito Smith had 66 yards and a rushing touchdown. The Falcons surpassed 100 yards rushing for the first time since Week 2.

“The big guys, they put the work in,” said coach Dan Quinn, whose team didn’t punt until midway through the third quarter and converted its first eight third-down opportunities. “We know we are at our best when both the run game and our pass game are in balance. And today we had that, and the results were there.”

Atlanta’s 30th-ranked defense did its part, too, holding Washington to 35 first-quarter yards and making a crucial stop after Ryan was picked off by Quinton Dunbar — just the quarterback’s third interception this season.

The NFC East-leading Redskins (5-3) could blame poor tackling, ill-timed penalties and a series of injuries along the offensive line for the end of their three-game winning streak.

Already without left tackle Trent Williams after surgery to repair his dislocated right thumb, Washington lost left guard Shaun Lauvao to a left knee injury, right guard Brandon Scherff to a left shoulder injury and struggled to stop the Falcons when it mattered.

Swearinger and other players blamed officials for part of the Redskins’ disciplinary trouble that added up to 10 penalties for 147 yards.

Adrian Peterson was held to 17 yards on nine carries a week after rushing for 149 yards at the New York Giants. Alex Smith was 30 o